on March 16, 2011
I have not blogged in a quite a long time since I regularly post to Twitter and Facebook, but this weekend's events have made me want to start up again.  I started geocaching on March 30, 2010, so I'm coming up on a year of this most wonderful hobby.  This was my first large-scale event to attend and it was nothing short of AWESOME!  My son, who is known as StAggie99, came home from school at noon on Friday and I took off work early and headed home.  We loaded up all of our gear and hooked up the pop-up GeoLodge and headed out for Huntsville State Park.  This was my first time to ever camp at this park and it was just beautiful.  The Redbuds and Dogwoods were blooming, so there were bright flashes of color amongst the brown trunks of the tall pine trees. Part of the Park had undergone a very recent controlled burn, so there were areas of blackened ground as well. 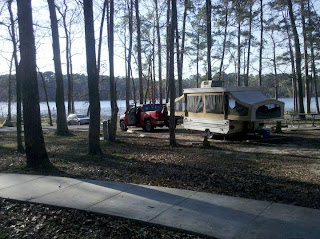 We set up the camper in site 148 with a little help from our cacher friends, theboggi, who were in the spot across from us. The camper is a 1989 Jayco that we got from my aunt and uncle in New Orleans (yes, it survived Katrina) a year ago and it's still going strong. We had a nice view of one fork of Lake Raven and we were really close to one of the restrooms/showers, which was handy. Once we were set up, we all got on the bikes and headed over to the Raven Lodge for the Texas Challenge 2011: Friday Night Meet and Greet to get our registration packets, pathtags, tshirts and geocoins.  After saying our Howdy's to several cachers there, we came back to the site to wait for the jjball's to show up since they were going to camp with us. We are all part of the Brazos Valley Geocachers from in/around the Bryan/College Station area (also known as Aggieland). We broke out the computers, mifi, gpsr's and phones to make sure we could load items to/from GSAK. Yes, we are high-tech campers. We made a fire and cooked hot dogs for supper and enjoyed some fermented grape juice. There was just a slight chill to the air, so it was perfect. 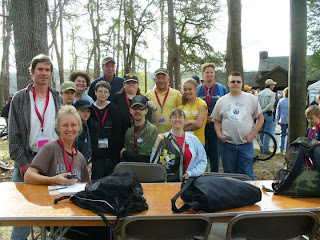 Saturday morning, we woke up early due to one obnoxious frog or bird that would not shut up. We had a light breakfast and headed over to the Lodge to get ready for the main Texas Challenge 2011 event, computers and cables in tow. There was a brief welcome and some scheduling announcements and then the team captains were given the thumb drives with the GPX file and the PDF's of the puzzles and such.  Let the loading begin! Several laptops were going to load each of the different kinds of GPSr's. Those of us that had our own laptops and netbooks quickly copied the files and passed the thumb drives along.  Ten o'clock and almost done...and THERE's the whistle!  The game is ON! Each of the 4 regional teams broke into smaller groups to head to different areas of the park to let the hunt begin. A good sized group of the Brazos Valley Geocachers headed out together. In addition to our little camping group, there were also the DotsonFamily and GrumpyTX (and daughter). For the next 4 hours, we hunted in various areas of the park - in the brush, in trees, in culverts, under logs and so on. The harder ones earned more points. Each cache had a unique-shaped hole punch in it with which to punch the cards on the appropriately numbered space. As the day went by, the punchings on the ground helped zero in on the cache's location (except where the previous finders were clever enough to drop "clues" a little distance away). We averaged around 15 finds each for our team.We turned in our cards to the judge at the nearest Aid Station near 2 o'clock and called it DONE. As we headed back toward the Lodge, we stopped at one of the welcome signs for a photo op. The judge actually stopped by to take the picture for us. We headed to the Lodge for a well-deserved BBQ dinner. I also completed my Geocaching 12 of 12 for March and loaded the pictures on Picasa online. 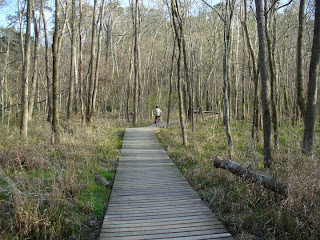 After we ate, there was an announcement made that 9 of the 20 Evil Caches were not found. Anyone that wanted to volunteer to go back out and pick them up (with the aid of a specific description and/or photo) would receive an item from DeLorme. Our BVG group picked up a couple and one turned out to be one that we had spent quite a while searching out.  Armed with the specifics, we headed back to the log pile and StAggie99 made the find. Evil indeed!  Jenny and Jim (jjball) went to turn in this first find. The other one was "just" on the other side of the lake across from our campsite. Just?! JUST?!!!  My son and I and theboggii headed out on our bikes. OMG! I really am out of shape. By the time we road over sandy paths and pine tree roots and ups and downs of the trail, my thighs were yelling at me. The clue? "Hollowed out broken stick".  Seriously?  There's lots of that around GZ.  Eagle eyes Colton, made the find again.  Good job, son!  May and Al (theboggii) went to get another one another mile up the trail and we headed back to deliver this cache. We dragged into the Lodge just a few minutes after the announcement of the winning teams. All we got for the effort was a cap and a sore butt :(  Our Central Texas team got 3rd. Oh well, we still had a blast. It was a beautiful day. 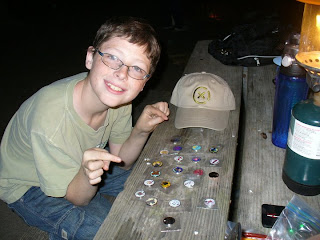 There was a silent auction and there was a bingo game. Cards were handed out to everyone at the Disco Is Not Dead, It Has Just Taken A Vacation event and the winner would receive a free PN-60w donated by DeLorme. Numbers were called out and it went for a while with no winners.  Then N-46!  EVERYONE shouted "BINGO"!  It was great!  Then they did a drawing for the number on the back of the card.  Some people were gathering to go find some of the local night caches, but most of us headed back to camp to rest our weary muscles and look over pathtags from the day. We also built a fire and made s'mores. Since most of us were using smartphones as alarm clocks, we didn't have to worry about setting our clocks up, but we would miss that hour of sleep.

Sunday morning and we started gathering up a few things around camp. We headed over to the Lodge for the pancake breakfast. MMMMM! It was good! We finally got a chance to sit down with AgNav and Scrapnphotos, our friends that were on the registration committee. After breakfast, the Texas Challenge 2011 CITO began. We signed the log and got a trash bag. We folded up chairs and tables and stacked them in groups and then walked the grounds around the Lodge to pick up trash. There wasn't that much to pick up. Good job, geocachers! Then we went back to camp to pick up and pack up the trucks and the GeoLodge. We went with the jjball's to find some of the actual caches in the park and then hooked up the camper to leave the park.

We stopped by the HUGE Sam Houston statue for a traditional and a virtual cache there. We stopped to get something to eat and grabbed a couple more caches.  Our last stop was I'd Rather Be Geocaching in Rather Park in Huntsville. It was my 700th find!

All-in-all, it was a superb weekend - good weather, good camping, good friends, good times. Found geocaches and checked in various places on Gowalla.  Next year is going to be in North Texas, so I'll start making plans now. Thanks to all the volunteers who gave countless hours in planning and carrying out this great event(s).
12 of 12 Camping geocaching pathtags Texas Challenge