I have not done a blog post or video in a while and here's why... Since mid-August, my whole world has gone pear-shaped on me. The summer was wonderful! I could not have asked for better. I thought my dreams were coming true. Then it all came crashing down on me. My source of happiness dropped me like yesterday's news. Then less than 2 weeks later, I started having pains in my upper stomach (from my waist to my sternum). I had the first round of blood work done at our employee clinic. I HATE needles!

🎈 By my birthday on August 27, I was already dealing with the constant pain in my stomach and loss of appetite. It was like a constant sucker punch that never let up and I attributed it to the abrupt incident listed above. It didn't stop me from going out with my dance group to see Kenny Orts & No Chance and dance as many songs as possible though. 54 trips around the sun. Woohoo!

Not long after that, I started getting this horrible itching that would not go away. More blood work. Shortly thereafter, I started turning yellow - my skin and eyes. I was referred to a Gastroenterology firm in Bryan. Guess what? More blood work and a CT scan. I had to have an IV for the scan. Meanwhile the pains in my belly and the loss of appetite where constantly present.

The Bilirubin count was WAY high. Normal range is under 1.0. I was at 14!!! The CT showed I had a mass on the head of my pancreas that was roughly the size of a quail egg. It was pushing on the Gall Bladder and the bile duct causing constriction there which caused things to back up into my bloodstream. If you get internal itching, go have it checked out right away!

I was then referred to St. Luke's Hospital in Houston (about 1 1/2 hour drive) for an endoscopic procedure to place stents in the collapsed ducts and do a biopsy on the mass. I was put on an IV and was knocked out for the procedure. It was a VERY long day and I am so thankful for my brother driving to Houston and for my parents being right there for me for this whole adventure! The next day, I was still groggy from the anesthesia and I awaited results. Then I got the call. The biopsy came back and it was not as we had hoped.

Those three little words no one wants to hear. YOU HAVE CANCER. 😲 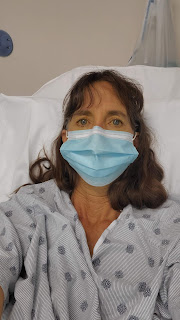 I have Stage 2 Pancreatic Ducticle Adenocarcinoma. The first procedure didn't work because the stent wasn't actually in the bile duct. NOTHING changed! I had to go back 2 weeks later for another procedure and a "work around" that actually worked. After a few days, the itching was almost unnoticeable. The yellowing took a while to go away, but my eyes are white again and my skin is back to it's normal color.

I got a referral from a surgeon and a referral for a couple of Oncologists. One in Houston and one in Bryan closer to me. I heard from quite a few people that Dr. Erin Fleener at the Cancer Clinic in Bryan is awesome, so I went that way.

I had a port installed in early November and I went in for my first chemo treatment on November 8. I have blood drawn on Mondays (again...more needles!), infusion day on Tuesdays, take a pump home for another 46 hours, have it disconnected on Thursdays, come back on Fridays for a shot to boost the bone marrow. It's a full week of activity and I can't drive to most of it. Then I get a week off and then another treatment week.

💉 Did I mention I HATE needles?! I have been poked and prodded more in the last 4 months than in the last 4 years or more. 😝 I have had to cancel several dance plans and camping reservations, including a couple trips to Bandera and the Hill Country. Nothing is as it should be! 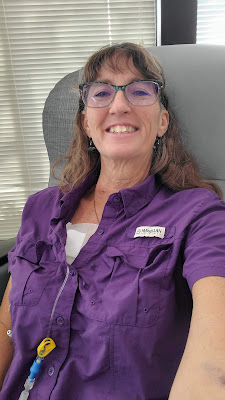 On round 2, I attempted to remove the pump myself since it was on Thanksgiving day. It was not as easy as it looked because of the tape sticking to everything. And as the calendar would have it, I had chemo the week of Christmas too.

I'm wired on the first couple of days and uncomfortable and have to pay attention to the pump and tubing that I'm tethered to for the 46 hours which administers one of the chemo drugs over time. How can you be tired and unable to sleep at the same time? I'm shaking and trembly for days and my fingers have a mind of their own. By the time I leave the office on Tuesday, I can't have anything colder to drink/eat than room temperature or I feel like I'm swallowing frozen sticker burrs. I get bad neuropathy in my fingers if I touch anything even remotely cold. By Thursday afternoon/Friday, it catches up with me and I crash for a couple of days and I'm doing good to shuffle from one room to another. Slowly, I get a little better each day and as the "off" week progresses, I feel a little better. I can even start having a few ice cubes in my "iced" tea. By Monday night, I can even have a bowl of Blue Bell (otherwise known as Ice Cream). My weight has not been this low since High School! 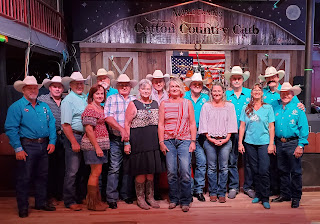 I have been able to make it to a couple of dances to see Kenny Orts and George Dearborne at the Cotton Country Club and even gotten to take my camper out of the driveway a couple times. I even drove out for a brief while to see Dennis Ivey in Caldwell.

I love my dance/camp group of friends! 🏕️👢💕 They have been a bright shining spot and big help in camping. In between good days, I feel like I'm on house arrest for a crime I didn't commit. Thank goodness for my RV YouTubers like Today is Someday, RV Texas Y'all, Changing Lanes and several others so I can travel virtually through their videos, cooking and grilling channels like Cowboy Kent Rollins and great shows like The Chosen because there's just not a lot of good shows on TV anymore. I also love watching the livestreams from folks like Vince Moreno and Cotton Country Club. It's ALMOST like being there. 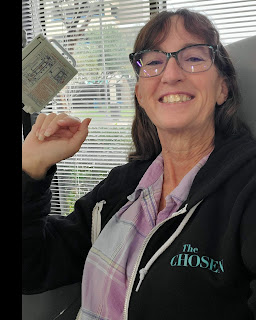 So, I have completed 4 of 12 treatments so far. The cancer marker blood work that we do once a month is looking good. Soon I'll have another CT to check everything out and we'll determine a schedule for a very massive surgery to remove the tumor and I'll probably have to sacrifice my gall bladder because of the nature of the surgery. There's a chance that I could end up diabetic for life after the surgery depending on how much of the pancreas has to be removed. We won't even start to discuss all the claims and bills that have started trickling in. Cancer is not for the weak-minded, that's for sure.

I have had lots of cards, calls, texts, gifts and such from family, friends and even some people that don't even "know" me. No one has of yet confessed to sending me the electric blanket, but I sure do like it! I have gotten rides to go places when my hands or legs won't let me do it on my own. Most of all, I have received a ton of prayers and I appreciate each and every one. God may not always let us know what He's up to, but I know he hears every prayer sent His way. It's His will what will happen from here on out, but I hope He brings me out on the other side of this and gives me a break for a change. Keep those prayers coming! Thank you. 🙏🏻💕

So, I am doing what I can to kick cancer's butt and get back to my life. It'll be a while in coming unless the Good Lord has other plans for me in the meantime. My motto is one I found from John Wayne (and yes, I have the t-shirt).

Courage is being scared to death, but saddling up anyway