In the Comfort Zone 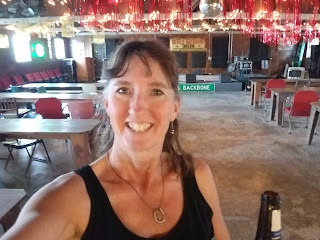 I made a quick trip to the Hill Country this past weekend to visit a friend, well several friends, and hang out. I left a little earlier than planned and ended up with a little extra time on my hands. The first stop was two and a half hours down the road at the Devil's Backbone Tavern outside of Wimberly on Hwy 32. To me, this is better than a Buc-ee's stop. This is one of those casual little places where some of the locals come on a Friday afternoon to just relax. There is a small dancehall attached that does have live music, but it was too early for that. There's an area out back with tables under the shade and it seemed to be a favorite. The beer is cold and that's what counts. Speaking of counting, I could have spent quite a bit of time counting all the dollar bills that are stapled to the ceiling. I should have added one of my own, but it'll have to wait until another trip. I didn't get any pictures of the bar area on this trip, but there's one on my post about Memorial Day Weekend.

I spoke with a man at the Tavern that told me I really needed to try another place on my way to Comfort. No problem! I love new adventures. 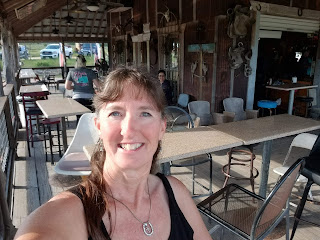 By the way, if you're leaving from the Tavern and heading west, there's a Rest Area on the right before you even get up to full speed. Take the time to stop there. There are flowers, memorials and locks on the chain link fence there and a beautiful view of the Devil's Backbone area. It's worth another stop. I could feel my spirits lift when the first hills came into view on this drive. The Hills speak to me.

Adventure indeed! I stopped at Hillbillyz of Texas between Kendalia and Sisterdale. It's a cool bar and grill with roll up doors so it's open-air. I got to meet Billy himself. Such an interesting guy and he's a good cook too. It smelled so good in there, but I wasn't ready for supper. Smothered pork chops were on special this week. 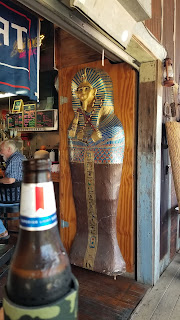 There is a big porch/deck around two sides of the building overlooking a little pond and hills in the background. There was deer walking around under the shade trees. I could have stayed here a while if I didn't have plans already.

While I was admiring the sarcophagus on the wall, all of a sudden, two guys ran up behind me and started stomping on the porch. I turned around to see what they were focused on. It was one of the Redheaded Centipedes almost 8" long! Big and black with yellow legs. I don't think they are poisonous enough to kill a person, but they could leave a nasty, painful whelp. It was just a couple of feet from my foot and had come up between a couple of the floorboards. I'm glad they saw it before it got to me. It was kind of a shock and I didn't even have a chance to snap a phot of it. It's all good though. I won't soon forget it.

I love talking to locals and if they tell you to stop and check out a place, you'll usually be glad you took their advice. Hole-in-the-wall places are my favorites. 👍 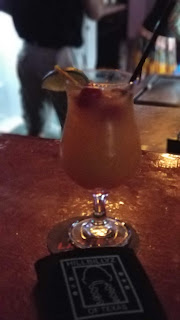 I left there for my final destination of the night - The Cocky Rooster Bar in Comfort, where my friends were waiting. It's the home of the $3 Fireball shot if you so choose. Jeni knows how to make a good Malibu Sunset, which is my favorite. If you stop in, tell her and Wendy I said Hi. I was sad that Wendy didn't have any of her pies tonight, but she still has good food in the food truck. There's also bar food and the wings are pretty darn good.

It was karaoke night and wow! Some of them could really sing! (And some thought they could.) Crazy Kim did a wonderful rendition of How Great Thou Art. Not exactly the best setting for it, but why not? Girl's got lungs! It was beautiful. 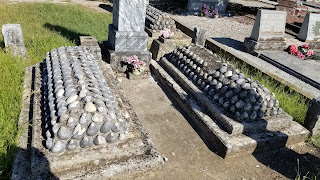 Saturday morning started at Los Jarritos for breakfast. I went in with the intentions of getting a breakfast taco, but the biscuits and gravy with sausage just sounded good instead. Maybe not the best in the world, but it filled my belly.

We went to check out the Farmer's Market, but it was pretty dead. I wanted to see the seashell graves in the German cemetery that I saw listed on Atlas Obscura and we checked them out and I even found a geocache there. As a reminder, the Hill Country is not exactly ocean-front property. If you want fun and unique things and places to visit on your trips, give the Atlas a go. 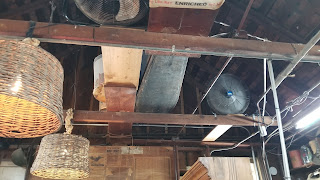 We made a stop by The Cartoon Saloon in Toonstone (north of Comfort) and I found the puzzle geocache that eluded me the last trip. TFTC!
We then made a quick trip to Luckenbach. It was mid-day and no music was playing yet, but there were several people milling around and checking out the Post Office/General Store/Bar. I dipped my toes in Grape Creek. 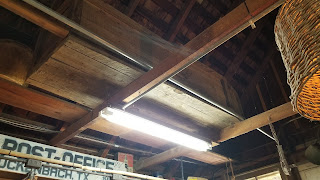 Back in the day, to be classed as a General Store, they actually had to sell caskets. There's a small child's one in the rafters that is from the original store. There's another larger one that was used as a prop in the movie The Pony Express Rider that was filmed around the area. Hondo, who originally purchased Luckenbach and named himself the mayor, actually played a preacher in the movie that buried Ken Curtis. The director gave him the casket as a gift. Be sure to look up the next time you're in "town". We had a nice long chat with one of the long-time employees there and he had some fun stories to tell. According to him, he was there when the Dead Sea was still sick. 🤣🤣🤣 After picking up a couple of items in the store, we headed back to The Cartoon Saloon and had a lazy afternoon chatting with friends and tourists that stopped by (and listening to more tall tales, of course). Later we made an early supper run to Hillbillyz. The pork chops were still on the special board, but I wanted to try the cheeseburger. M-M-M! Everything smelled and tasted good. Not many small open-air bars in the Hill Country have fully functioning fish tanks to class up the joint, but this one does. No centipedes today! Finished off the night at The Rooster. It was pretty quiet, which was ok too. We ended up in a mini golf tournament on the big game machine.
Sunday morning, I got a chance to make it down to the Guadalupe River down by the Twin Bridges. The water wasn't as cold as I though it would be and felt great. I really wish I had put on my swimsuit and brought my "creek chair". I know it's really a beach chair, but it all depends on what your intentions are when you buy it. A couple of women were getting ready to head downstream in their kayaks. I bet it was a great paddle. 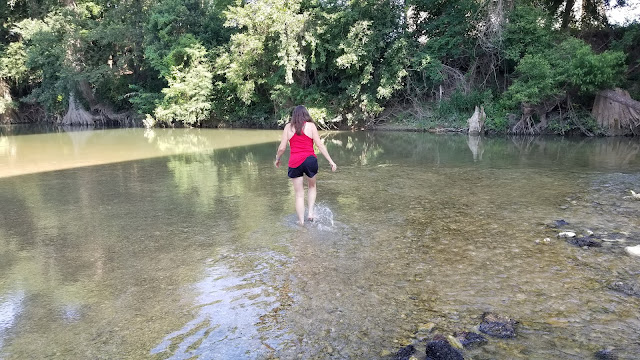 There was a man there rigging up a fishing pole with a young son. He had a small box with a pizza in it and about half of it was on his face. He looked up and just grinned from ear-to-ear. At the river, with his Daddy and good grub. Doesn't get much better than that. I LOVE the cool, clear waters of the Hill Country! 💕 I swear it's like therapy hearing it trickle and run over my feet. Places like this are where my soul is the most at peace.

I loaded up my things, left a Munzee, said my goodbyes and headed out on my journey home. I saw a video recently (but from a couple years ago) by Tom and Stacie of RV Texas Y'all about their trip to San Marcos. One of their stops was at the Hwy 80 Feed Barn in Martindale just south of San Marcos. It was only a few miles out of my way, so I planned to make it my lunch stop. This restaurant used to be an old cotton gin. My Daddy would love it! I'll have to bring him out this way sometime. The vault where they kept important paperwork is now a "party room" and the door stays open. In the back area there is an Event Center as well. There's a small seating area out back a stage that could host some live music. It is right off the highway, but it wasn't bad. No live music, but they were playing good music on the speakers. You can't go wrong with Johnny Bush. I got the catfish basket and I was not disappointed. It was a worthwhile stop.

After I left to finish my trek home, I had to go through Bastrop. I'm telling you, afternoon traffic at the end of a weekend is NO FUN in this somewhat small town. I'm kind of glad I wasn't towing Matilda Mae through all of that. Note to Self: Find a different route home for Labor Day Weekend!

It was a short weekend, but we packed a lot into it. I think I'm still full!

I have been making my own planner backgrounds for a few weeks and several people have asked me how I did them. Well, here's the tutorial. Let's plan...digitally. 📒💻 👍🏻 Please  Like  and  Subscribe  on YouTube I am using PowerPoint 2016 and the Windows 10 OneNote App. See notes on video for links to shop where I purchased some of the images. Please give it a Thumbs Up 👍 on YouTube and subscribe to my channel to keep up-to-date on future videos.

Thanks to all of those cachers who stepped out in many new directions during February.  I'm quite sure that most of these would have been found and/or placed regardless of this contest, but maybe some were a direct result of it.  I only had 10 forms that were turned in.  I know of a few others that said they were working on it earlier in the month, but I did not receive their entries. I'm disappointed that I didn't receive more, especially from the more local folks, but I'm going with what I've got.  Congrats to the winners.  Prize packages will be going out next week. Many thanks to those who donated items for prizes: GxProxy Opencaching.com (Garmin) Opencaching.us Terracaching.com The following is a cumulative total of all the entries received in this Diversified Cacher Contest. Totals for each task in the contest can be found on my website . Caches FOUND Geocaching.com - 104 Opencaching.com - 5 Opencaching.us - 9 Terracaching.com - 23 Caches PLAC