Had a lovely weekend camping with friends and relatives. The lake is still up just a bit and we had off and on showers, but we made the most of it. We ate good and were able to relax. Big Creek Park did not have their own fireworks display this year, but we had a great vantage point for the displays at Welch Park. Due to the rains, I don't think the temps even got up to 90°, but the humidity felt like it.
North Shore, Park Road 4 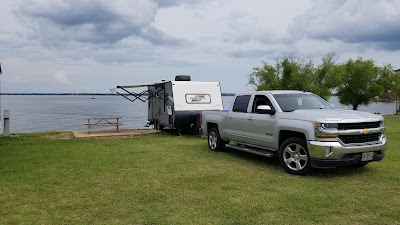 🚘 44.5 miles round trip - 9.4 mph
I'm going to rant for a moment...
People...seriously?! Don't leave your trash and cigarette butts behind for the staff, or worse yet, the next campers to find and pick up. This is just nasty! Think about a couple with a small toddler arriving after you...EVERYTHING goes in their mouth. YUCK! Do you want to be responsible for that? And, let's turn it around...couples with children in diapers, DO NOT leave them around the campground. I had to pick one up on my last outing. It's disgusting! Be a better camper! Don't be the reason that campgrounds close or have to enforce common-sense rules. 😡 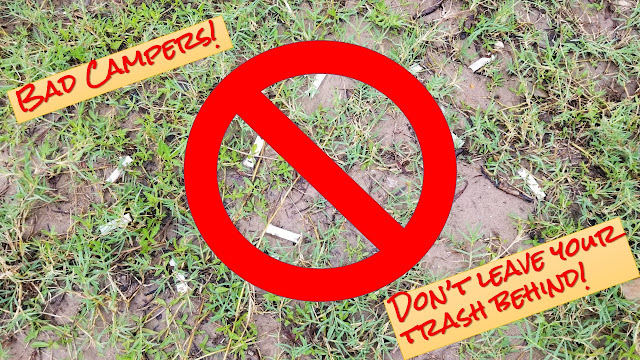 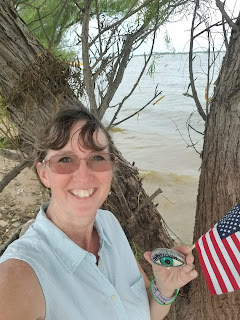 We had a group of four RVs this trip. I put out the painted rock that I got from the RV Show USA. I hope it brings a smile to the person that finds it and I hope they post a picture on the Be a Better Camper page.
We had sausage wrap-arounds for supper and set up the Cornhole boards. More friends came for a while and brought the Littles to stay. I added pool noodles to the slide and it was a good visual to them as they were running around playing. The mosquitos were present, but not terrible. The flies, on the other hand, were awful! 🦟
This was the first trip with the Clear2O inline water filter. I actually drank water from the faucet. It filters down to 1 micron, but I didn't notice any reduction in water flow rate. 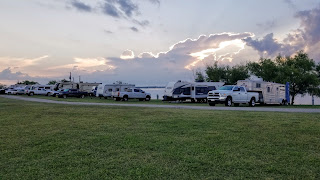 The lake was quiet and calm this morning. I took a little walk towards the store. I love mornings in the campground while most people are sleeping. We had our coffee and sat around for a little while. Later, we had biscuits and gravy made in the Dutch oven over coals for breakfast followed by Mimosas. Good eats! 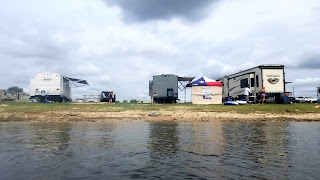 We got a pretty good downpour for a while, so it was a good time to take a nap. It cleared off and we were able to get out in the lake for awhile and then there was a long-running cornhole game. We set up two canopies between my trailer and the 5W so it was our kitchen/dining room/entertainment area. We took all the kids for a slow ride on the Mule around the park. We had more day visitors. We had little bits of sun, but mostly overcast with a few sprinkles throughout the day. There were a few lightning bolts, so we stayed out of the lake for a while...and then the kids were back in. 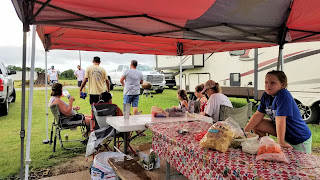 Saturday nights are our typical BYO Steak night. I love it! We had lots of food to share! There were lots of fireworks going off at Welch Park and we had a good view of them across the lake. Somebody somewhere was shooting off some large fireworks about 4am. So much for quiet hours! 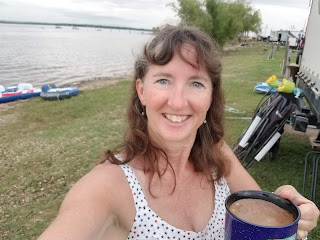 Sunday morning was pretty much a repeat of Saturday. Nice and calm in the morning. We had cowboy coffee and breakfast tacos - and mimosas. I like a little coffee in my cream. Brewed camp coffee is the best! It's so much better than drip coffee. Sorry Keurig!
Camp hair. Don't care!
We got in the lake again for a while. Alternating sun, clouds, light rain. There was a full rainbow that appeared later. It's cool to see the whole thing from end to end. 🌈 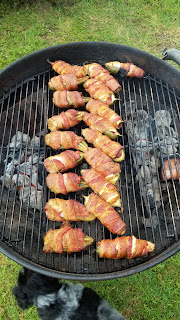 We did BYO Meat night. The guys had the Weber Kettle going and a small cooker. Of course there were jalapeño poppers (it's a camp staple in this group). We had quail and a young turkey, Tablitas and a Mexican dish that was soooo good. LOTS of good food. We had country ribs and pork chops but we put them back in the refrigerators because there was too much already. All the kids had fun playing in the water while the adults sat around or played Cornhole.
🎆 The fireworks at Welch Park started just after dark and we all went around the other side of the 5th Wheel for a good view point. We were disappointed to find out earlier this week that Big Creek wasn't doing their display this year. That's why we booked these sites so early. There were lots of boats in the water watching the displays. We could others on the Washington County side of the lake as well. 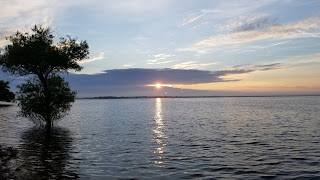 Another peaceful morning. A few people had left yesterday afternoon. I had just enough OJ and champagne for one last Mimosa. We had leftover breakfast tacos for a simple meal. Most of the group started packing up to head home. We are all weekend RVers, so there's the pack up, dump, go home, set back up and unload to think about. 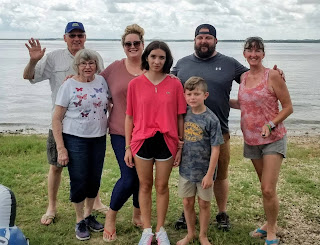 My cousins and the kids came mid-morning since they had been in Austin for the weekend and then Mama & Daddy came a little later. We made hot dogs and had a picnic lunch with them before they had to get back on the road to Louisiana. After they left, I stowed everything and closed up Matilda Mae and had a few sprinkles in the process. Daddy helped me hitch up and then followed me to the dump station. They followed me home. Unhitched and turned on the AC and went inside to take a nap. It was a nice relaxing weekend, but with the sun and activity, I was bushed. I never even got to put a hook in the water this weekend.
👍🏻 Please Like and Subscribe on YouTube
Big Creek Camping Good Eats Good Friends Lake Somerville Munzee painted rocks RVing Swimming Travel
Location: Big Creek Marina, End of Park, Rd 4, Somerville, TX 77879, USA