on July 19, 2021
This was a nice park and had lots of Spanish Moss hanging on the trees. Site 144 was great! Plenty of room around it and space between the neighbors. I had a perfect view of the sunset.  The shoreline here has a few rows of concrete bricks with room for grass to grow in between. Past that, the lake bottom is nice. If the water goes down some more, the blocks will be out of the water. The park has lots of deer that roam around at all times of the day and there were a few fawns at this time of year. I would definitely come back to this section again. 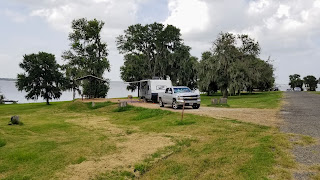 • On the shore of the lake facing west 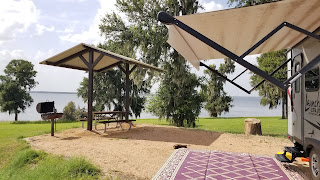 • Trees for some shade
• Covered picnic table
• Close to restrooms/showers
• Plenty of room between sites
• This site is aligned perfectly. Sit at the picnic table and watch the sun go down between the trees
• Extra parking area across from site (mostly unused and starting to grow up)

• No sewer hookups
• Site slopes off steep on edge of site. Watch small children
• Some of the trees around the site have been cut down. They still show on Google maps though.
• Watch for ants 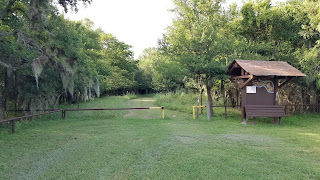 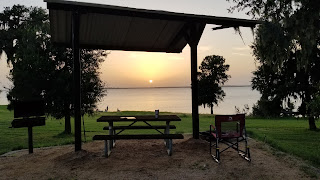 This was a beautiful spot. It was perfectly aligned so that you can see the sunset from the picnic table in between the trees. The trees around the site were draped in Spanish Moss and it gave me the feeling of being in Louisiana. Deer were plentiful and there were several fawns around although they were hidden in the grass most of the time. I went out to Wild Bill's to get something to eat because I wasn't in the mood for sandwich stuff. This is a neat little convenience store/grill/bar. The countertops and support posts are cedar. The beer is cold and the burgers were fresh. The hand cut fries were tasty. I went back to the campsite and watch a gorgeous sunset. The sun just dropped and faded so I watched it until there was nothing left. I made a fire and watched it for a while. Yes, it was 82° at 9:30 pm, but who cares? That's one of my favorite camping activities. 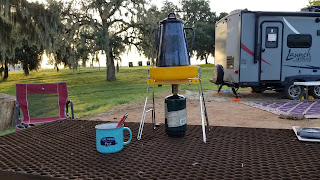 My neighbors were pulling out early and left firewood for me. It was good split wood too. Score! I made my coffee. Had to bring out The Mug since this is the Same Trailer, Different Park. The water was so calm this morning. I would have been perfect for kayaking or even a paddleboard. My friend showed up and I made us breakfast tacos and then ran a couple errands while he fished. Mama & Daddy came out in the early afternoon. We made a fire and did the steaks and baked potatoes on the grate. 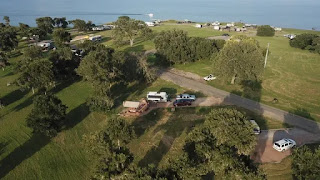 Daddy brought his drone and got some aerial shots for a new perspective. After they left, I aired up my River Tube and floated for a little bit while I watched the sun go down. I need a little anchor so I can just float in one spot. The catfish were coming to the surface after the minnows. I didn't get my tackle out though. Made another fire and watched it for a while. Took a shower to wash of the humidity, lake water and smoke. There are restrooms and showers nearby, but I just used the one in the camper since I was leaving the next day and had plenty of tank capacity. No need to drag everything out. 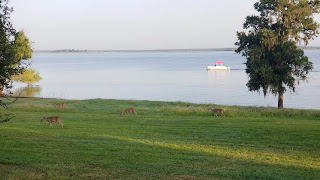 The deer were grazing near the site and didn't even look up when boats came around. I made bacon, eggs and cheese grits for breakfast. I got my new Posse Pioneer shirt from RV Texas Y'all and this was a perfect time to wear it. I found a Geocache on one of the trails in the park. Haven't done one of those in a while since I mostly concentrate on Munzee. I got on the tube and floated for a little while to catch a little sun. Then it was time start the teardown processes. I've kind of got it down to a science, but I still refer to my lists to make sure I haven't forgotten things. I do a couple of "final" walk-arounds both inside and out to be sure. I remembered to turn off the hot water heater switch this time. 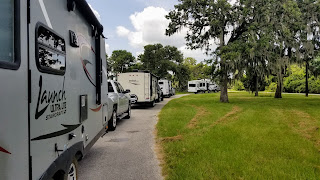 After I hitched up, I headed to the nearest dump station (which is headed out in the right direction). When I got there, I was 4th in line. This ain't the line to Disney World, kids! Had time to briefly visit with the couple who came in 5th. Watched some of the deer and a fawn while I waited. I would prefer full hookups, but I'd be glad to come back to this park. This was a last-minute trip and I'm glad it all worked out.