We don't get very hard winters here in central Texas, but it sure made up for it this year! Texas had sub-freezing temperatures throughout the entire state. You know it's cold when Galveston and places down on the coast have snow! 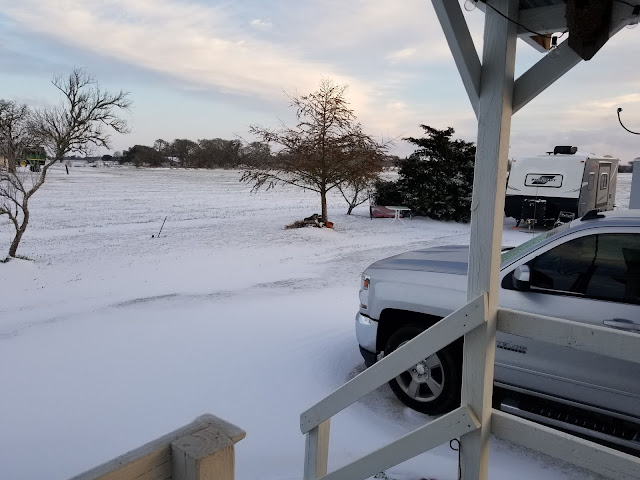 ❄ Sleet/snow started at my house on the evening of Sunday, February 14. I was NOT celebrating Valentine's Day, but that's another story. Temps were dropping and white stuff was falling and continued to fall throughout the night. We had been warned it was coming, so I drained all of the water from the lines in the camper to get ready. Moved a few plants indoors, put foam bonnets on exterior faucets. I recently got my propane tank topped off so I was good to go...or so I thought. 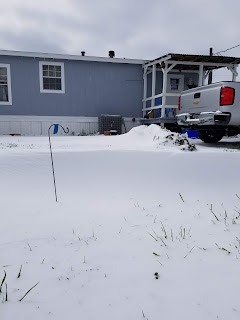 Everything was blanketed in white when I got up on Monday. It was a good day for working from home and it continued to come down. If it clinks on the window, it's sleet. If it's silent, it's snow. I love the silent snowfall! Until the "rolling" black outs started. I have propane heat, but it takes electricity to run the fan, thermostat, etc. It seems we were off more than we were on. More like 52 minutes on, 1 1/2 hours (or more) off.  Luckily I have a laptop and a mifi, so I charged everything when the electricity was on and coasted on battery power when it was off. After a while, I even kept my power brick charged and ready. This first night, the power went off and was off MOST of the night. I was under several layers of blankets and I was sooooo cold. With the rain/sleet/ snow combination, the side of the camper was glazed over and I couldn't get the door to budge. It went through one night of no heat. 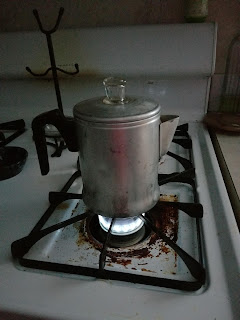 Thank goodness I have a propane stove too. A strike of a lighter and I was able to make coffee! Who heard of single digit temps here and the wind chill was in the negative numbers! (Did I mention I live on the prairie?) The wind was awful! But no matter the temperature outside, a good Texas girl still has her Blue Bell.
🐦 The birds sure appreciated the feed I put out for them. You know it's cold when the Mockingbirds are eating from the seed feeder. The cardinals showed up so pretty against the bright white background. I enjoyed watching them off and on over the days while I was working from home. I was NOT getting out on those slick roads with the black ice under all the pretty white. 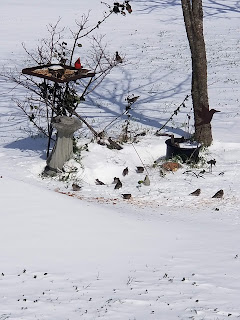 The freezing temps and outages continued for days. One day, the electricity blinked a few times before 8 am and it didn't come back until after 6 pm that evening. It was in the upper 40's INSIDE the house. I had finally gotten the camper open and turned on the heater on very low between 55-60°F just to keep pipes from splitting. I went out there for a little bit here and there during the day (but of course there was no water out there). I'm sure I looked like a shore bird running back and forth with the tide. I was dressed for function, not fashion. Thermals, wind pants, a thick warm robe, socks, slippers... Then I would add a heavy coat and Crocs boots if I walked outdoors. I was not built for this weather! Give me a 100° day any day over freezing temps! 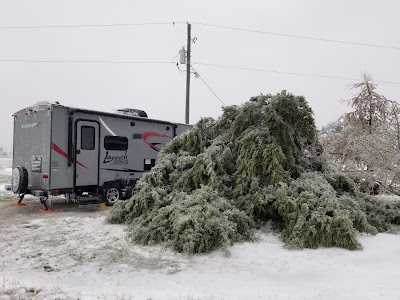 I lost several branches from a few of my trees, but most of my trees are not huge (give them a couple more decades). My parents lost quite a few large limbs from the Live Oaks and Pecans in their yard. My cedar tree looked like a creature from a science fiction movie. It's like it grew legs and was trying to emerge from the ground. This was the "snow went away and the ice came in" stage.
I survived and the camper seems to have survived as well.  Hooked up the water and tested everything and all looks good. I'm so glad I had drained all the water out ahead of time!