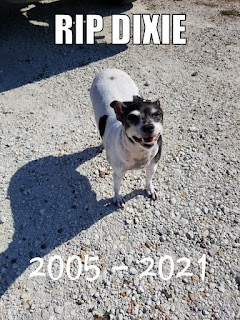 My 15-year companion, Dixie, passed away yesterday morning and crossed the rainbow bridge.
I woke up to find her laying in the middle of the living room floor. She has not been herself the last few days and had barely left her little bed so I knew she was not doing well. It was still a shock.
My brother and my parents came over and helped bury her in the backyard wrapped in her favorite blanket. We talked about her and shed a few tears. It was a sad day. I was working from home that day after we took care of her, but I felt like I should have been on bereavement leave. 😭 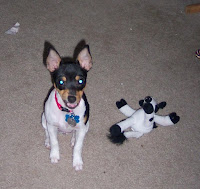 We picked Dixie out of the litter before she was even weaned. My son said "Look at that little face". She won us over a wee age. We were able to bring her home Thanksgiving weekend of 2005 and she became an instant part of the family. I got her to be a companion for my young son, but she attached herself to me. She would sleep with me in the bed and she loved burying herself under blankets and pillows. You couldn't sit anywhere on the couch or bed without checking for a lump first.

She liked to go wherever I was and she liked being outdoors when I was. She has been on multiple camping trips, geocaching trips and hanging out in the yard. If I would ask "Do you want to go camping?", she would get so excited. Even if it was only in the back yard. You could see her grin. 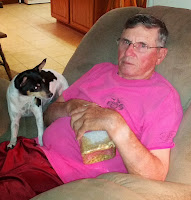 She had my Daddy wrapped around her little paw too. Whenever we went over there to visit, she would always jump up on the recliner with him and share his peanuts. Many times, he would say in a gruff voice "Hey hound dog!" and she just wagged her tail as if she knew it was an inside joke. A Rat Terrier would not be Webster's definition of a Hound Dog.

We always called her "Shaky Butt" because she would get so excited about things and wag her whole back half. If my Mama was watching her and told her "Mama is home", she could just open the back door of her house and Dixie would come barreling across the pasture. It was sad the last few months that she didn't wag at all and the little tail stayed mostly clamped down. She used to jump up on the bed and couch, but the last couple years she had to have help getting up. She walked slow, but she still liked to curl up next to me. 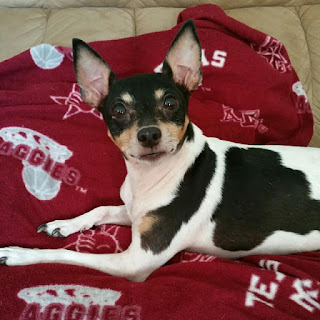 She had two tricks that she learned at a young age. Roll over and Stick 'em up! On the later, she would stand up on her back legs and stick both front legs straight up in the air. My son even entered her in the County Fair pet show. She had her own cute personality.
It's going to be hard coming home to an empty and quiet house. When I pulled out the carpet a couple of years ago and got my vinyl plank flooring, her nails tapping around was a constant comfort that she was there. She was my cleanup crew for my leftovers (and even if I wasn't full, I always saved her a bite).

She has a spot in the yard next to a small pine tree. At some point, she will be under it's shade. She'll forever be in my heart. I'm going to miss my baby girl. 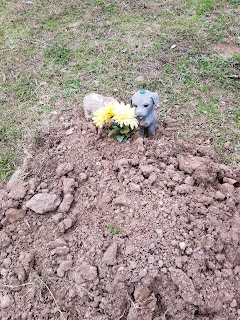