on October 26, 2017
My certificate finally came in the mail!  I actually feel like a Microsoft Certified Trainer now. 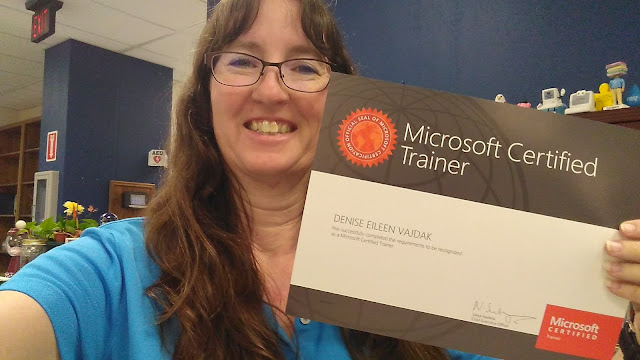 This certification took several years, lots of exams and quite a bit of money.  I had to have the Master level Microsoft Office Specialist certification for versions 2007, 2010 and 2013.  Each certification level was made up of 4 or more exams and half of them being Expert level exams. The exams were around $100 each just for the voucher.  Each exam was almost an hour long and for the last version, I had to travel an hour and a half to Austin or Houston as our local Certiport testing center in College Station no longer proctors the exams.

I think any major goal takes a lot of effort to make you appreciate it all the more.  If it was easy, it wouldn't be special.

I have actually had the Master MOS since the 2003 version. Lots of buttons and functions have been added, or more than likely, moved around and renamed. I have always been "into" the Microsoft Office suite of products and considered the certification and investment and betterment of myself. I have been a member of the International Association of Administrative Professionals (IAAP) since 2008 and I have been fortunate enough to have my executives agree to send me to the Division and International conferences over the years. Many thanks to Gus and Bernie! 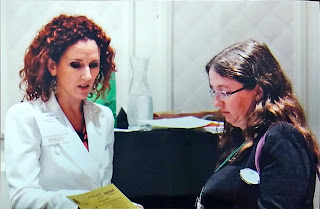 In 2013, I met Vickie Sokol Evans, MCT and owner of RedCape Company, at one of her sessions in our IAAP Texas-Louisiana Division conference. She was awesome! She taught us all so many things and had fun while doing it. I had found my role model. One of the things she said was that one of the best ways to remember how to do something is to teach others. It hit me that this is something I would like to do and so I have been working at it ever since. I signed up right then and there for one of her Boot Camps and I have taken many live sessions and online trainings from her since then and I always learn (or remember) something new every time. 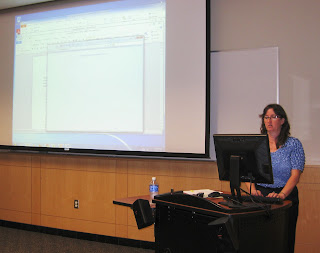 I have been an Administrative Assistant at the City of Bryan for over 22 years now and, not to toot my own horn, I'm pretty good at what I do. I love taking long manual processes and coming up with spreadsheets or other methods of more efficiently accomplishing tasks. Is it possible to be "giddy" about spreadsheets, tables and OneNote? I have created and presented multiple training classes over the years, both live and webinar-style, to City personnel and even to some local groups in the Bryan/College Station area, including our previous IAAP chapters (I sure miss the local networking from the "chapters"). Teaching others is the favorite part of my job. 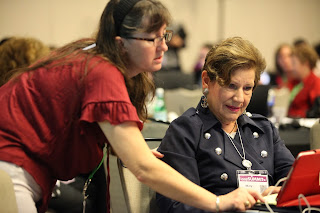 Almost all of the trainings have been as a volunteer or part of my job duties, but when I hear things like "Oooh" and "Aaah" or "OMG! I wish I had known that during my last project!", it just makes my day and confirms that I am on the right track. Of course, Starbucks and fuel gift cards have always been a favorite Thank You reward. At one of my presentations at Texas A&M University, one of the professors in the room semi-whispered to a colleague "<big sigh> Wow! She's magic!".  I think that has got to be one of my top favorite kudos so far. Thanks for the opportunity, Sharon Mena. At the most recent annual summit of the IAAP in New Orleans, I was thrilled to be able to assist Vickie in some of her sessions with the hand-on portions by moving about a room of over 100 participants and helping them one-on-one with their issues. It was an honor.

Now that my son is a college student and quite capable of taking care of himself, I would love to be able to take some time off and afford to be able to travel some and do classes elsewhere. See what I did there?  A new goal has been set.  This is not a destination, it's a journey and I'm so glad to be on it!

I know everyone has different personalities and various ways of accomplishing goals, but I have always thought that if you want to do something, you find those who are doing what you want to do and learn from them and try to incorporate what draws your attention into your own behaviors. Attend conferences, webinars, watch YouTube videos, follow your heroes on social media. Then, and here's the kicker, don't just follow from afar. 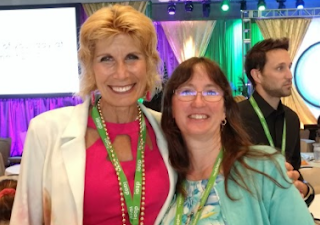 Go up and introduce yourself. Get to know them and don't just be a number in their "following" counts. They may be at the point where you want to be, but they didn't magically wake up one day on top of the pile. They had to work to get there. Let them know your goals and aspirations and they will most likely offer you encouragement and a few pointers and pitfalls to avoid.  (Photo bomb by the inspirational and entertaining Josh Sundquist.) 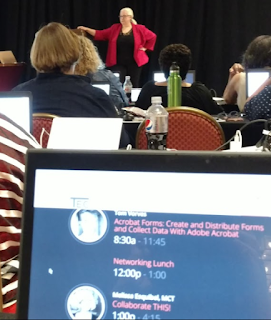 I have also enjoyed the training and support of some of the other greats in my area such as Bonnie Low-Kramen, former assistant to Olympia Dukakis, CEO of the Ultimate Assistant, speaker and consultant, and Melissa Esquibel, MCT and Office guru, and they were among the first to congratulate me on my accomplishment of attaining my MCT. God bless them all for being a part of this!

If you have also thought about becoming a MCT, click here for more info. I did the Microsoft Office certifications route.
Certification MCT Microsoft teaching trainer training