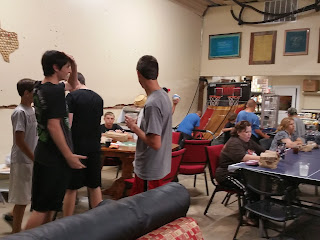 This past weekend, we embarked on a trip with our youth group including 8 adults and 16 children (most of them upper teenagers) to go to Eureka Springs to see the Holy Land and The Great Passion Play.  We loaded up in to 5 vehicles and started the almost-600 mile trip at 7 am.

On the way there, we stopped at the Munzee Marketplace in McKinney, TX to eat lunch there and visit with some of my Munzee buddies. This is the headquarters of my favorite scavenger hunt game. I set off 4 blast captures and didn't even make a dent in the map. Thanks for the hospitality and accommodating our group Behind The Wall, guys! 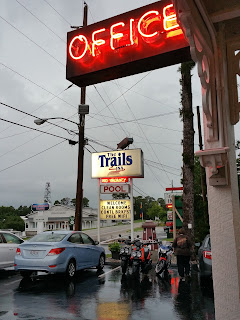 Weather was good until late in the afternoon where we ran into a torrential downpour! By the time we go to our destination, it had started clearing off and it was nice (and hot) the rest of the trip.  We stayed at The Trails Inn and the owners were very friendly and extremely helpful in pointing out good places to eat and things to see and do in the area with a large group such as ours. I love their Swiss accents!

After we got settled in and stretched our legs a bit, we walked over to Cafe Amore and had some of the best pizza I'd ever had. Good, homemade, hearty pizza with fresh ingredients. Good suggestion from the Inn and I highly recommend them. 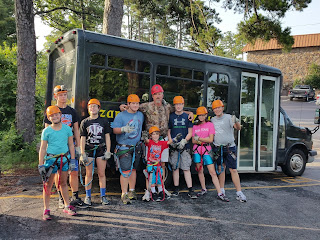 Friday, we took the kids over to Ozark Mountain Ziplines so they could go zip lining through the mountains.  They suited up in 2 groups and boarded the small buses to take them to the course of 10 sections. We have a big zipline at our church camp each year, so this wasn't entirely new to them. They were raring to go and really enjoyed the extremely high views and length of the course. 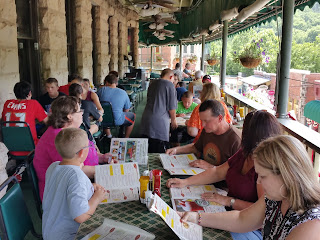 While the kids were busy, so of us adults drove around and scoped out the places we were going to visit.  For lunch, we all ended up in the historic downtown area at the Basin Hotel, which is the oldest hotel in Eureka Springs and we ate at the restaurant on the balcony, relaxed, listened to a couple of guys play the guitar and fiddle, and watched the people go by on the split-level streets below. The kids got a kick out of the restroom with the elevated tanks in the old style of toilets. 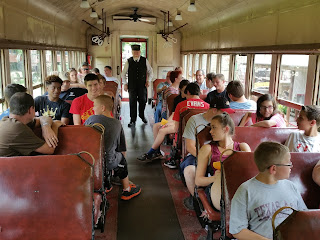 After we walked by some of the shops, we went down the road to the Eureka Springs & North Arkansas Railway so we could all ride the 1925 model rail car through the woods.  The conductor was nice and we all got to get out of the car at the far end of the line and lay out coins for the engine to smash as it moved around from pulling at one of the car to connecting to the opposite end to make the trip back.  We flipped our seat backs and faced the "now front" of the car.  The ride was a little slow, kind of short and didn't have any wide open scenic views, but it was still ok. 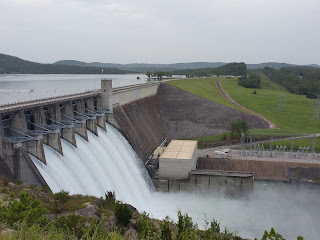 We all went back to the Inn and changed into swim suits and took all the kids to a little park just off the dam at Lake Beaver.  The water was a little high after all the spring rains, so some of the tables were a little under water, but it made a good place for them to sit and relax in the water. There was a large area cleared out and roped off to make a good protected area to swim, but the water was pretty cold.  After a while, we left and stopped across the dam to watch the water pour out - a high capacity. Then we ended up back at the Inn where the pool is a constant temperature of 80°. 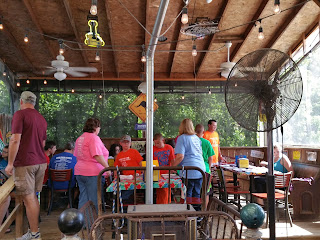 Saturday morning, we took our time getting up and got our group together for an early lunch at Sparky's Roadhouse Cafe, which was another good suggestion, and happens to be Aggie-owned and operated. Good food, excellent burgers and a decent price.

It was a nice stop before heading out for the biblical portion of our trip and the main reason we came. 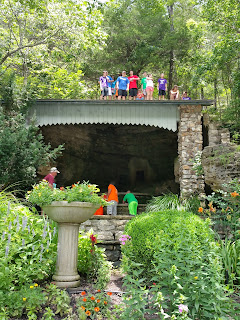 On the way to The Great Passion Play area, we stopped at Magnetic Springs.  It was a pretty little stop which I found because there was an Earthcache there. Supposedly, metal objects placed in the spring will become magnetized. We didn't stay too long, but our kids were more inclined to hike up the little trail that ran around behind, and on top of, the little pavilion instead of playing in the springs itself.

I love my scavenger hunt games! They take me to the coolest places that I would have otherwise just driven right by and missed.  Even though I get quite a bit of ribbing from most of the group, every once in a while, it's a place we can all enjoy. 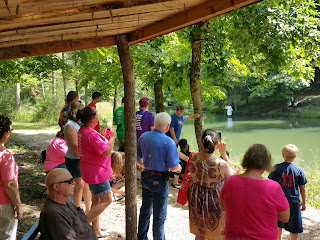 We got to the Passion Play grounds and got our tickets for the Play and the Holy Land tour.  We walked for the first part of the tour and got to see several stops that included animals and actors and points of interest along the way and then we came to a true-to-scale replica of the Tabernacle and heard an interesting talk about the contents and the special meaning of everything.

From there, we ended up at a pit stop and then boarded buses that took us to the other stops along the way, including the Sea of Galilee where we saw Jesus walking on the water. He walked around and came to talk to all of us and the kids really enjoyed that. 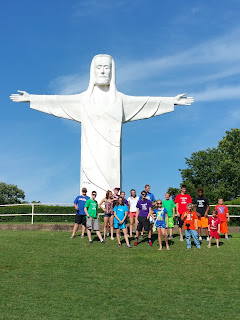 Back at the main area, we drove over to the Christ of the Ozarks and took the almost-mandatory group photos and selfies in front of the statue that was built back in 1966.  We had gotten bright-colored shirts at our church camp in June and we all brought them for the trip.  They made for vibrant photos this afternoon.

Then back to the main area where we got to go through a couple of gift shops and browse through the Bible Museum. There were a lot of interesting pieces in the museum and some are worth hundreds of thousands of dollars.  It's an awesome testament to what some people have gone through to preserve the Word of God over the centuries and millennium.

We ate at the buffet on location and then listened to David the Shepherd and the Potter talk about things that they had done and seen.  I think the kids enjoyed David almost as much as anything during the day. He was informative, but very entertaining as well. 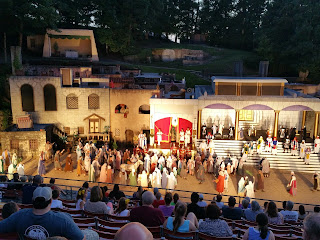 Finally it was time for the Passion Play itself.  Several of us had come when WE were teenagers and it still and awesome thing to behold.  Actors ran all over the set, up and down the hillside, multiple times throughout all of the scenes.  With the sound setup, you could almost hear every hoof fall from the sheep and people.  Every time the sheep ran through with the shepherds chasing behind, this group of small children behind us would just crack up. They were so cute with their giggling. God bless the innocence of little children!

Some of the younger kids had some good questions after the Play.  It's one thing to hear all the stories and watch movies on TV. It's quite another to witness it in real life-size portrayal right before your own eyes. 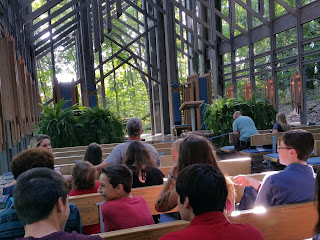 On the way out of town on Sunday, we got to attend the early service at Thorncrown Chapel. The lady that sang and played the piano has been here for 33 years and she only came for a "summer job" back then. Again, this was something we visited as kids and it was most definitely worth stopping again.  I'm glad we were able to share all of this with our children.

It was a long drive home and we got back tired, but fulfilled from the 4-day whirlwind trip.
Eureka Springs geocaching God is Great Munzee road trip youth group