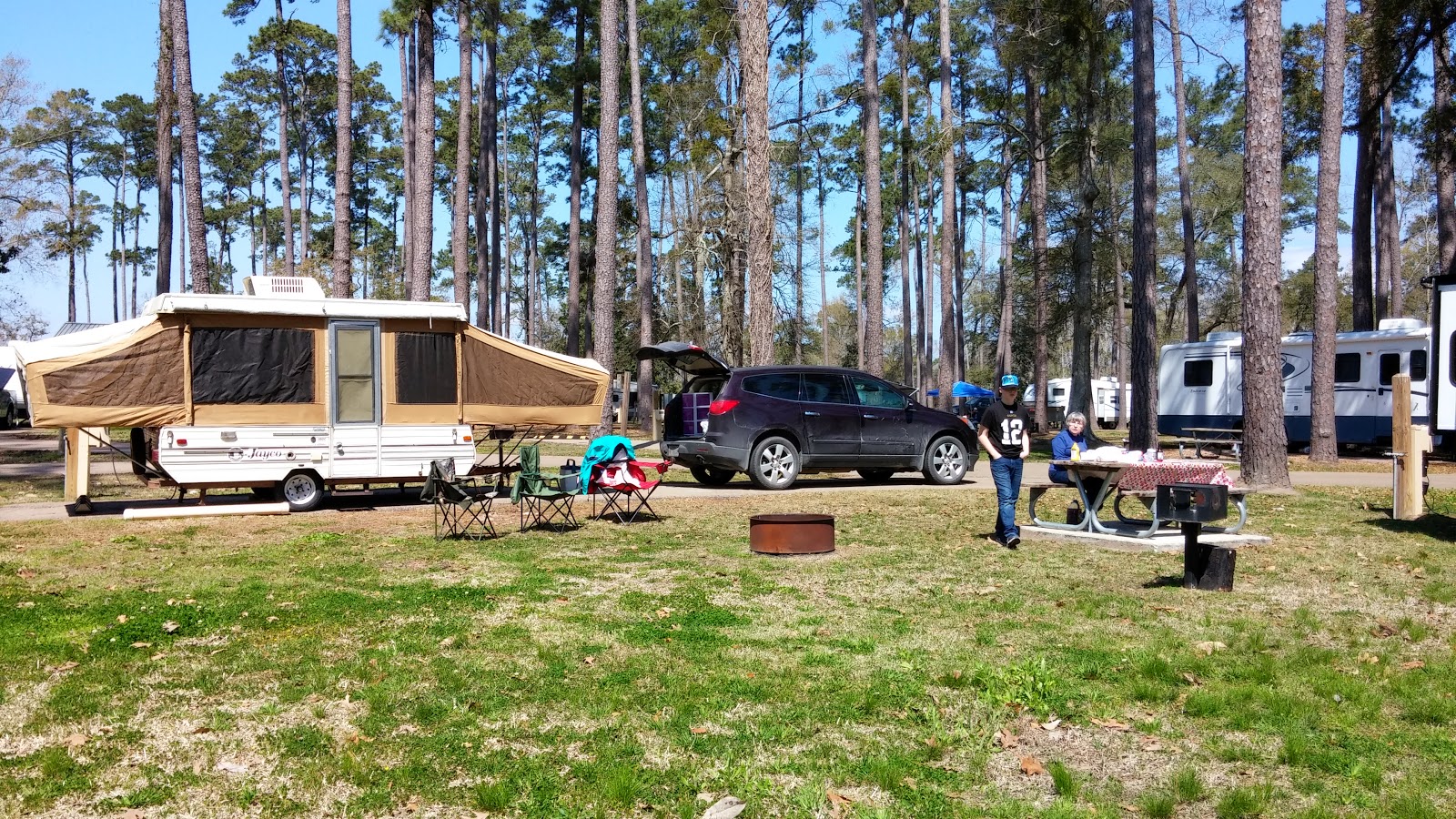 This week was my son's Spring Break, so I decided to take a couple days off work so we'd have a long weekend to spend in Louisiana with relatives. We didn't get to come at Christmas, so it's been a while since we were here.

Our cousin and his wife have a new baby. Our aunt wasn't feeling 100%. Dang allergies!  I sympathize for sure! We didn't want to intrude on them too much, so we took the camper and made reservations at Fairview-Riverside State Park in Madisonville.  I LOVE camping, but my son doesn't.  So we both got to do some of what we liked. He has been dying to go see the baby and we both have been craving beignets.  We got to do a fish fry for Mama Amy's birthday celebration, which was soooooo good! Good job Matt and Uncle Dane!!!  I love fried catfish and it just hit the spot.  Max fell asleep on my chest for a couple of hours and all was good until my backside started to fall asleep. :) 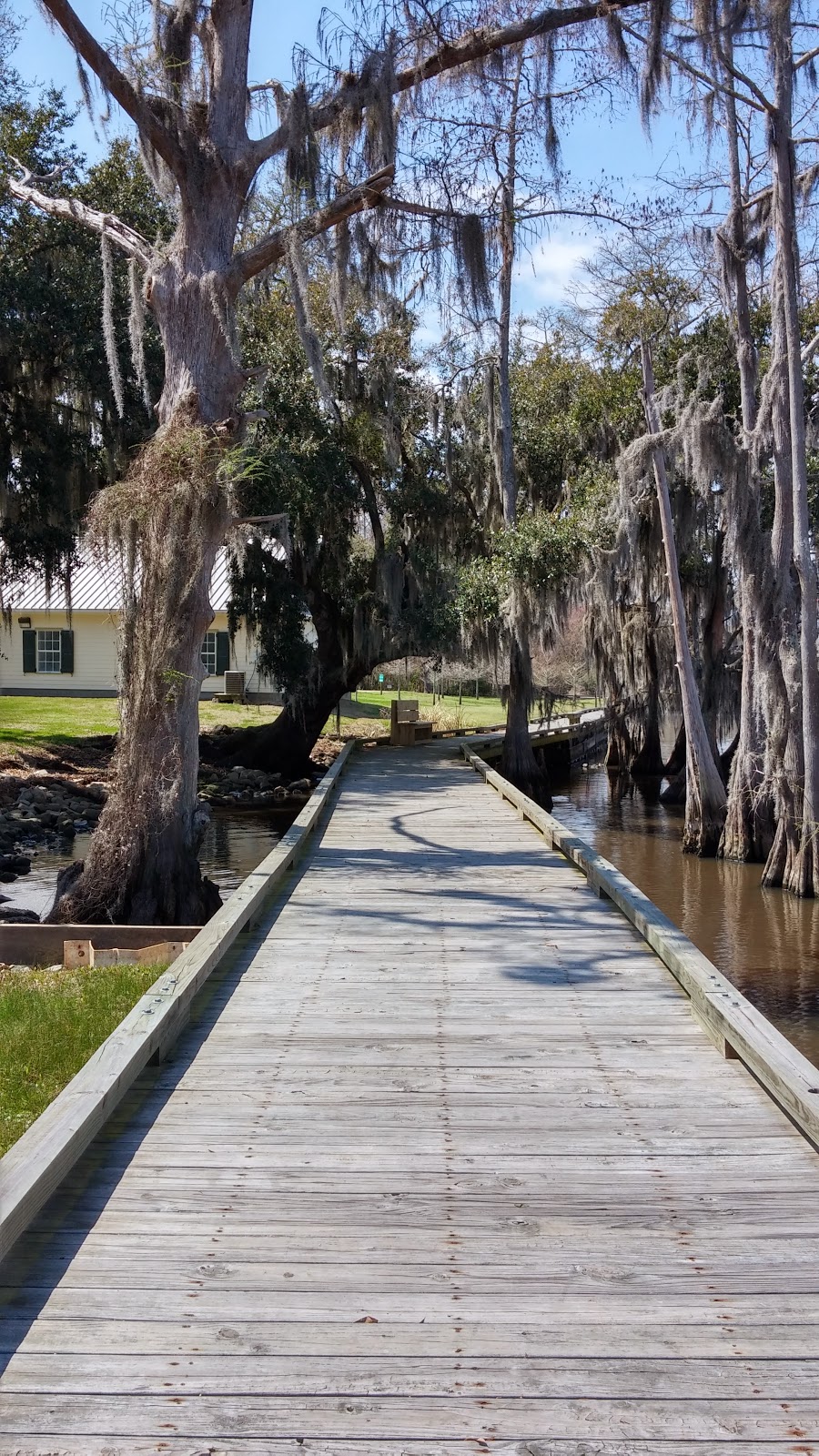 This was our first time to camp in a Louisiana State Park, so we added another spot on our Places We Have Camped map.  The staff was friendly and the campground was peaceful. Restrooms were available in the various areas of the park and they were nice, large and clean. There was a boardwalk along the river and throughout the Swamp Trail.  I love the Spanish moss hanging on the trees and blowing in the wind. I know they exist there, but we did not see any alligators.  It's still a little cold though.

There was one couple from Illinois that had an entire garden of solar-powered moving "plants" in the front window of their motor home. How cute!

On Saturday morning, there was a guided bird talk/walk. Our knowledgeable guide, Lori, showed us feathers, feet and skulls of various birds including a Bald Eagle, Barred Owl and a Cardinal. You can really hear the difference between feathers popped in the wind from a Peacock and an Owl.  We walked around the park to locate the species that were out in the day use area, the river and the swamp.  Just as we got started on the Swamp Trail, it began to rain and the group dispersed.  We got to see several and a couple of them are lifers for me. (*)  The little warblers were very active in the park.  Note to self:  bring birdseed and binoculars on the next camping trip.

I also got to do some of my favorite scavenger hunts on this trip.  I was unable to find the Munzee in the park, but I added a couple of my own. I did capture some Mystery Munzees on the way home, though. 65 points on just 2 of them. 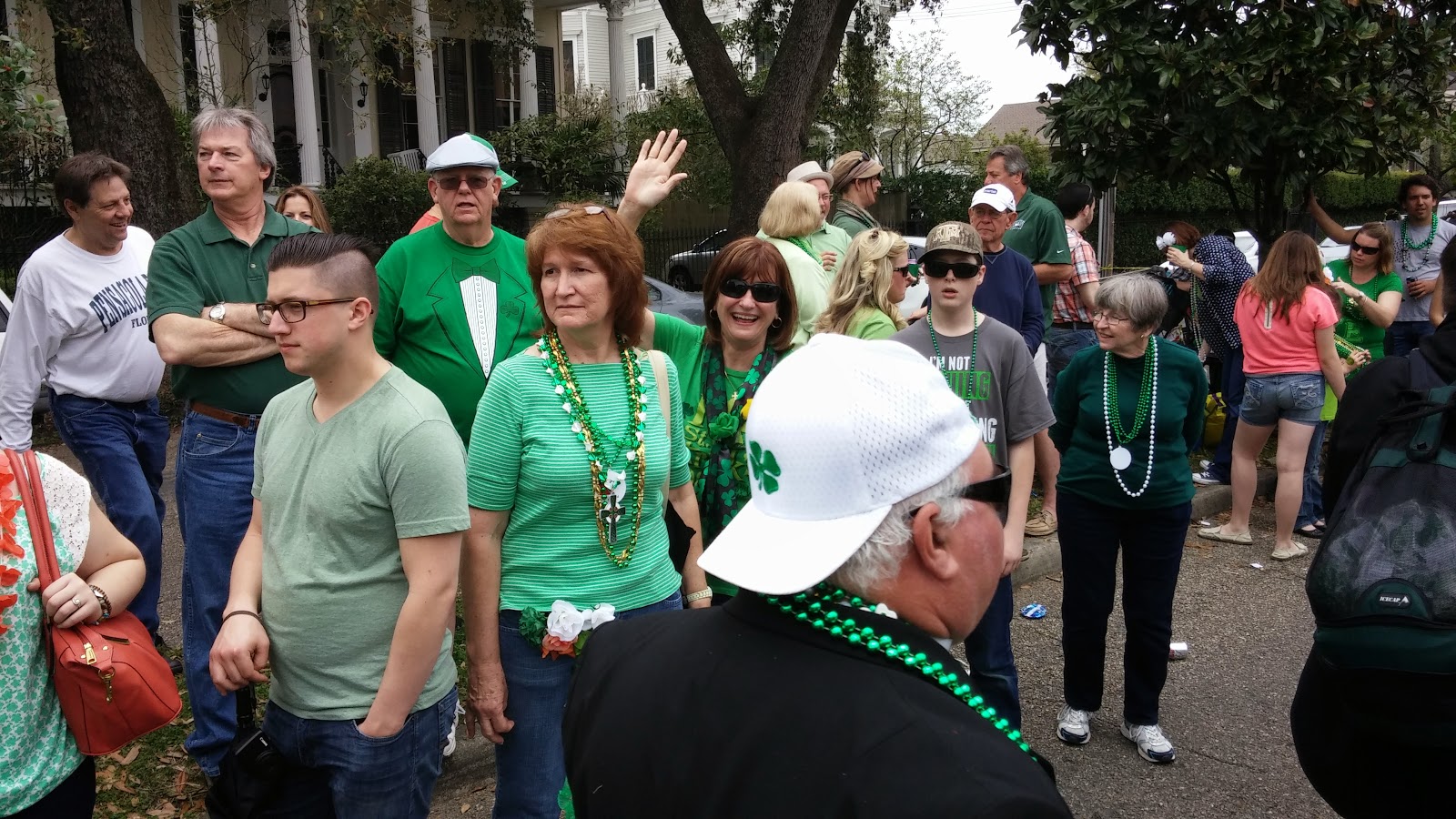 On March 15, I completely filled my caching calendar on the Groundspeak site.  I had filled my calendar on March 28, 2012 with finds on multiple listing sites, but this is just on the one site. I like to share the love between the sites. Later on Saturday, we went down to New Orleans with my aunt, uncle and friends of theirs to attend the St. Patrick's Day Parade. 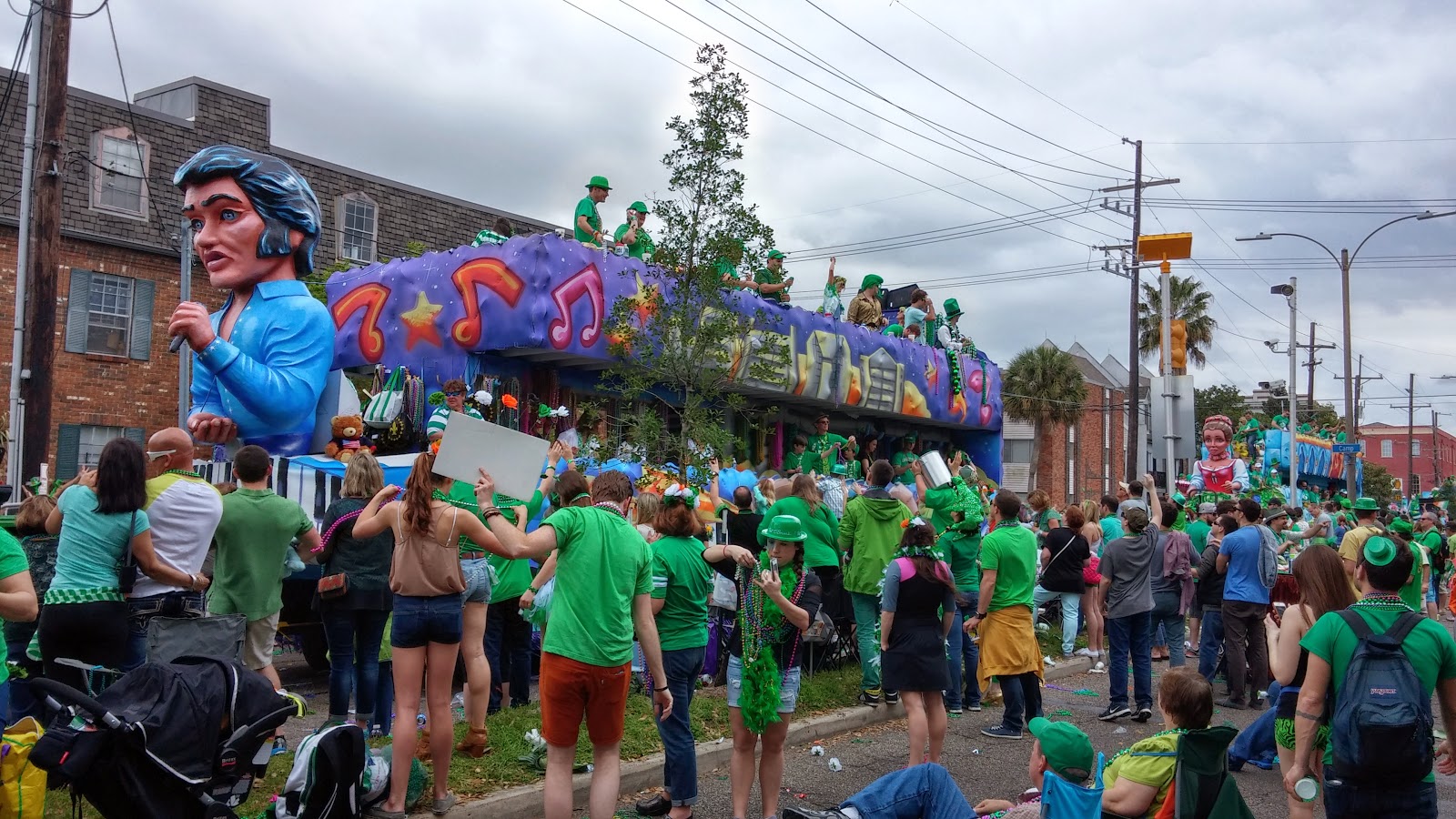 It's a bit like small Mardi Gras parade, but all in green. There were lots of small "marching" groups. Some in tuxedos, others in kilts.  The floats were throwing out beads, scarves, boas, cups and such. Everyone had some form of green on. 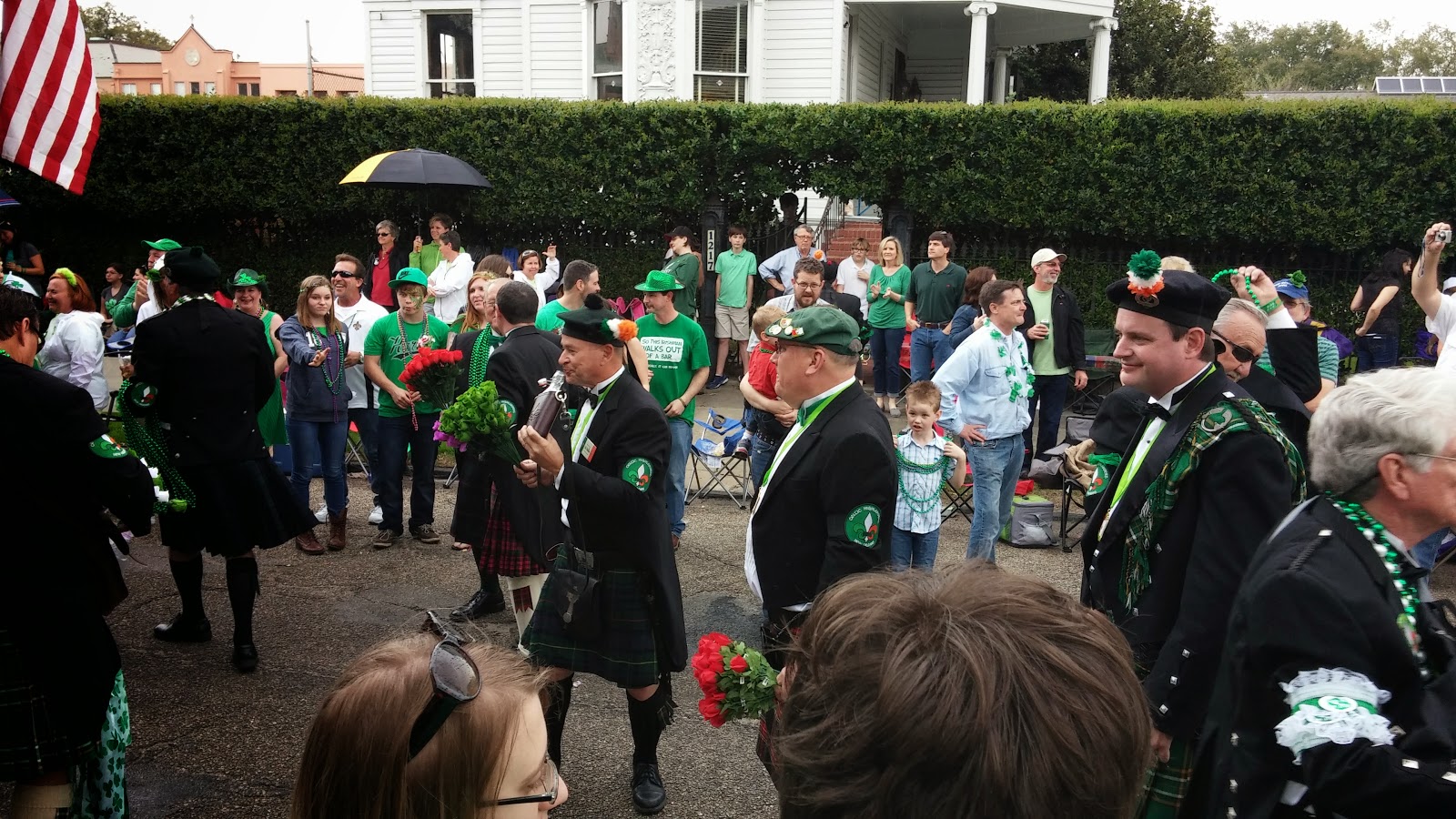 For the holiday, they also toss out ingredients for Irish Stew.  It's a treat to catch cabbages, carrots, potatoes, onions, noodles (packages of Raman noodles) and the like.  I'm quite sure that most of the parade walkers that were vertical at the beginning of the parade were not by the end of the parade.  Fun in New Orleans!

The camper is staying with both of my cousins and they will share it between themselves and with their spouses. They are excited to have it back on their side of the Sabine River.  I know they will get more use out of it now that they can use it together. Since hitting the teenage years, my camping buddy is not into it anymore.  On the way home, we fought a lot of wind.  It made for a tiring ride, trying to keep the car on the road. Good thing we weren't pulling the camper.

We used the Waze app on the way there and back.  It sure helps to see hazards (and police sightings) ahead of us.  There was a major accident in Houston and we were able to route around it to save a lot of time. I am now a Warrior Wazer. My brother liked it that I could send him our route and he could see where we were as we made our way home.