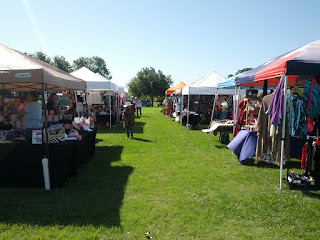 This past Saturday was our hometown festival in lovely Downtown Snook. Yes, there IS a Downtown Snook! I was in charge of setting up the craft and food vendors this year and I had all 24 craft vendor spots spoken for. I think we had about 4 of them as no-shows, but it was still a nice sized show. I had a booth with my AdvoCare products and Popcorn Shirts from The Magic Scarf Company.

It was a little breezy for the vendors, but the temps were great for festival-goers. I think it was a good idea to move it away from June. Of course, this year was really crazy with the weather and it was actually cold in the morning. Jackets? In May? Whoda thunk it?! 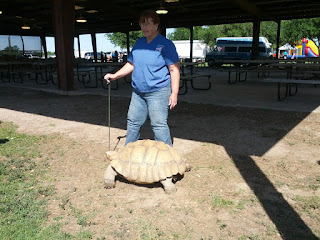 There was the usual BBQ cookoff, parade, children's barnyard, craft vendors, kids area and antique tractors. This year, we added a car show as well. For our first year, we had a good number of entries. The barnyard area also included the reptiles again this year. It was peculiar to see a large land tortoise being "walked" around the festival grounds most of the day. That thing could really get around pretty quick, too. Lots of people stopped to take pictures of it (or with it). I know we asked that "pets" not be brought to the festival, but I think we can make an exception in this case.

At noon, several geocachers came by my booth for the WWFM X which we hosted as the Brazos Valley Geocachers. That is the World Wide Flash Mob. We met up, signed the log, took a picture and passed out door prizes. I got some of them and some of them were donated by GxProxy and Travel Fleas.  During the festival, we also held Flea Fest, a letterboxing event listed on AtlasQuest.  I explained "Fleas" in a previous post.