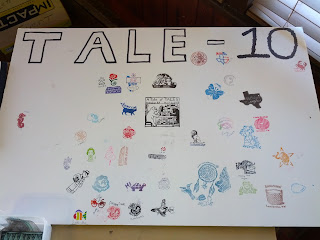 I got to attend my first big Letterboxing event. It was held at Buescher State Park in Smithville, TX and was called TALE 10 - A Tale of TALES.  I got to to the park right at 10 am and I met a couple of boxers at the front desk. Texas Wench and Crabbie Ol Man and the boys.  They were boxing event newbies, too, so we decided to sit together at the tables.  Some of the more experienced boxers told us the best thing to do was to sit in one place and let others come to us.  Good idea!  Since we were new, we had a LOT of exchanges to do. I started putting faces to the names I have seen on the Atlas Quest boards and the Letterboxing Texas Yahoo Group. 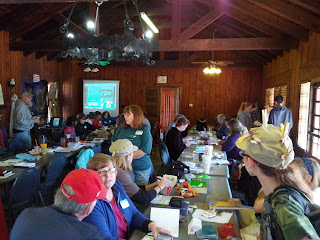 Cooties were rampant at this event. We were covered - and we loved it!  What's a Cootie?  It is a stamp (usually on the small side) and it is meant to be passed from person to person. There are other traveling boxes/stamps in Letterboxing.  Fleas can be passed from person to person or from box to box. They are the most versatile. Hitchhikers are to be passed from box to box only.  These travelers are about equivalent to Travel Bugs (coins, GeoKrety, etc.) in geocaching. Most of the ones we saw at this event were attached to wooden clothes pins. This made for easy attachment to people's clothes, jackets, caps, hair, etc. 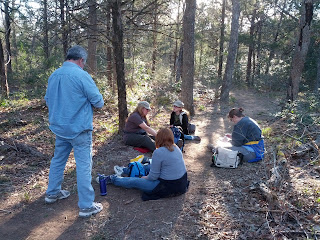 After a couple of hours of stamping and exchanging and meetin' folks, it was time for lunch. There was a little bit of everything, so it was quite a spread. There was a raffle and lots of prizes, but I didn't get one. :(  It was fun to watch the going's on anyway. After that most people took to the trails.  Texas Wench and crew and I grabbed a couple of short-time boxes and then hit the main trail in Buescher to work on a series of boxes.  We met up with other boxers along the way and it was nice to walk and chat. We only had time to get five of the ten boxes before we had to head back. I was able to get one of the Texas Parks Geocache Challenge 2013 caches on the way back. I had things to do at home, so I wasn't able to camp out here this weekend. That was a bit of disappointment because it was great weather for it. There are more boxes to be found and I definitely plan on being back - SOON! 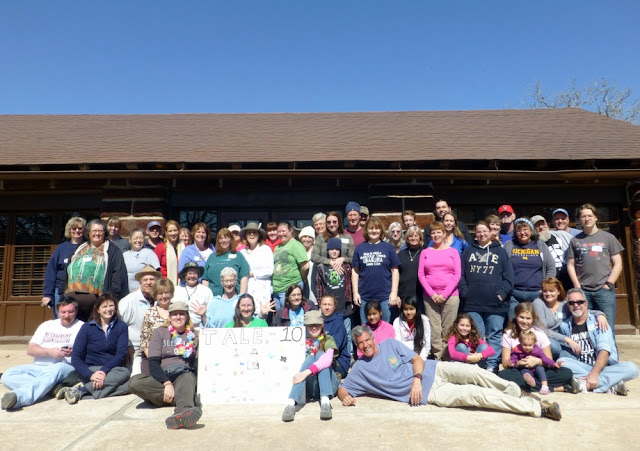