on March 09, 2013
Today was a very windy and overcast day, but I still couldn't stand being cooped up in the house. This afternoon, I headed over to Birch Creek State Park (I'm getting good use out of my Parks Pass) to find a couple letterboxes that I hadn't found.  Since I was there, I went around and found 3 others that I had already found about a month ago, but somehow lost the card with the images. The wind was crazy, but when I was on the trails, the woods blocked it out for the most part. I added about 4000 steps to my daily total. 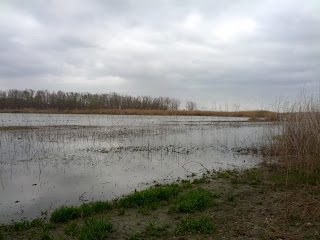 The last one that I found was in one of my favorite areas of the park and it had a high concentration of bird life. The Brown Headed Cowbirds were in a HUGE flock and they were very loud when they lifted off and moved around. There were coots and herons out there and a couple of gulls.

I cut out all of the images and a couple that I had found between the lost images and today's finds.  All are now applied to my journal and it is up-to-date. I THINK I have my finds marked off on both Atlas Quest and Letterboxing.org if they are cross listed.  I prefer the ones on AQ better because I like seeing messages that previous boxers have left.  Is it a cool stamp? Is it in good shape?  Missing?  You can also rate boxes there.

I'm up to 69 boxes found, not including Event boxes and Hitchhikers/Fleas/Cooties. I think I've found all of the geocaches in this park.
Birch Creek SP birding letterboxing