My son and I both had off this past Monday and so I decided we should go camping after church and the quarterly congregational meeting on Sunday.  We threw together clothes for overnight and a few food items before heading to church. After we got home, we were ready to go within about 30 minutes. Checked the air in the tires of the camper and added a little to one of the tires and we are on the road headed to one of my favorite parks, Birch Creek State Park on Lake Somerville.  We had our pick of many open campsites for the night and chose one in the Yaupon camping area, Site #12.  Post Oak area was closed due to some dead tree removal. We got the camper set up and then walked around some of the trails behind the campsite.  Colton has gotten interested in Birding since watching The Big Year.  I'm glad to see him taking an interest in something outdoors. He's got the Audubon Birds app on his Android and he's enjoying adding birds to his new life list.

He got really tickled the other day when we were at Snook Park.  He was playing the sounds for a Carolina Chickadee and one came closer and closer until it was in the tree right above us.  It kept calling back and forth with the sounds from his app. 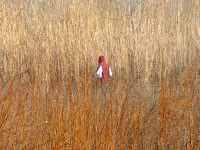 Anyway...back to the camping trip...  Around the point at Yaupon is a pond/marsh type area and it is FILLED with lots of bird life.  We saw Anhinga, Gulls, Coots, Redwing Blackbirds, Chickadees, Cardinals and a multitude of LBJ's (Little Brown Jobbers) - sparrows that are hard to ID in a constant state of motion.  Note to Self:  Next camping trip, bring binoculars!  We kept looking for the Bald Eagles, but we never did spot them.  My brother came out for a while and he brought his binoculars, so we did some more bird-watching until it was getting dark.  Then it was time for one of my favorite parts of camping...the campfire.  We got a nice fire going and it was nice just to sit and listen to bird calls and the pop and crackle of the fire. No TV! 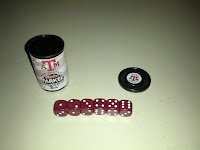 We fixed a light supper and, after Scott left, we played UNO and tried to figure out Farkel.  On my very first roll, I rolled a straight. 1-2-3-4-5-6.  Very cool, but I'm not sure of all the rest of the rules. UNO was fun, but it would have been better with a couple more people. Tomorrow is Mom & Daddy's 46th Anniversary. Otherwise, we might have talked them into coming out here to join us. 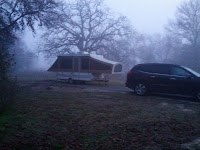 After a good night's rest, I woke up to a VERY foggy morning. You could not even see the lake past the reeds.  Hearing the water birds calling and echoing out across unseen waters gave it an eery (but cool) effect.  I got another fire going and sat out by it for a little bit while Colton continued sleeping with Dixie in the camper.  I think I was the first one up in the campground. Our friend, John, who is a Park Ranger stopped by to say hello and then he took off to try to capture some nice foggy-morning photos in the Park. As the fog was lifting, I found a nice spot to add a new cache/letterbox. Look for Animal Tracks - Mouse on geocaching.com and atlasquest.com. 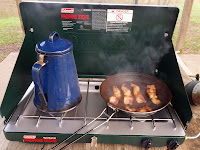 I pulled out the new Coleman stove that Scott gave me for Christmas and got it set up.  I made some VERY CRISPY bacon.  Wow! That flame is hot!  After making adjustments to the flame height, I managed to fry up a pretty decent egg without cremating it. When Colton got up, I made scrambled eggs for him. There was no sense in making a pot of coffee for just one person, so I settled for hot water to make hot chocolate for the both of us. 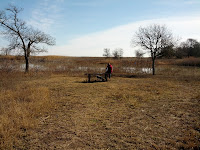 We spent most of the morning walking around the trails at the edge of the lake around this point and walked over to the point where I know of an ammo can cache that's hidden.  I checked the conditions of it and found a geocoin.  All was nice and dry.  There was a bench out here and we just sat and enjoyed the weather and the birds. It's strange that we didn't see a single deer since we got here. They are usually out in this park pretty abundantly. 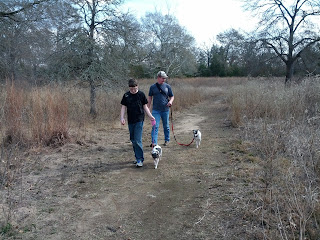 Around lunch, my brother showed up again and brought their dog. We hit the trail between Yaupon and Post Oak areas to find a couple of letterboxes. It was an absolutely gorgeous day for a walk. Colton added a couple more birds to the list. I found the letterboxes, the dogs were inspecting everything along the trail and we all had a good time.  No time clock, no rush. There's another big cut ant colony near the trailhead near Group Pavilion #3 in the Cedar Elm camping area. The amount of work they do for tiny creatures is nothing short of amazing. Once we made our loop (just under a mile) and found the one letterbox that had given me troubles on previous trips, we decided to go rent one of the canoes and check out the lake from the water. 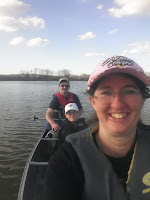 There was very little wind this weekend, so it was perfect canoeing conditions.We got the key from the office along with life vests and paddles.  We paddled from the boat ramp way around the point were were were camping at the far east end of the state park.  We were able to get pretty close to some of the birds. While we were in the back up the creek between all of the reeds, my brother started playing some Cajun bayou music and it was just great. Still no sign of any Bald Eagles. Colton wanted to row over to Snake Island. The lake was calm so we decided to go for it. By now, the dogs had settled down to the fact that we weren't going to toss them overboard or leave them off somewhere. 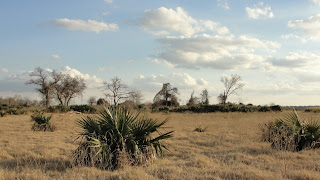 Walking around on the island at this time of year is like being transported into another place and time. I love the Palmettos dotted around the island.  With the grass all brown and laying over and the dormant skeleton-looking trees, it put me in mind of some Jurassic landscape and I half expected to be running from some Land of the Lost dinosaur at any moment. We walked over to the other side of the island and saw several birds. Add a White Pelican to the life list.  When we finally left the island, we headed across the water to the boat ramp once again. According to Google Maps, we rowed over 3 1/2 miles on this trip.  I'm so going to feel this tomorrow!  We locked the canoe back up and got all the equipment ready to take back. Went to pick up the camper and we headed home. This was a great escape for just a day or so.
Birch Creek SP birding Camping Colton geocaching letterboxing walking
Location: Birch Creek State Park, Somerville, TX 77879, USA