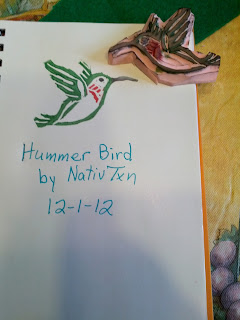 Over the past week, I have been in a hiding and seeking mood and not just for a little bison tube with a tiny scroll of names and dates.  I carved two new stamps and got my boxes ready. I got one letterbox hidden in Bryan on Wednesday while I was at the Food For Families Food Drive all day. I listed it on AtlasQuest.com and I also posted it on Opencaching.US so both groups of seekers can log the box.  The instructions lead you on a small adventure to find Norman, the little mouse that lives in the woods. The first finder was topcrop and she suggested that this would be a good place for a series, so I went back out on Friday and hid the other box in the same general area. These are listed as This Bud's For You and Hummer Bird. I carved a small stamp called a Flea. This little stamp and its accompanying log can be passed from person to person or it can be placed in another box.  These "fleas" act like Travel Bugs on geocaching.com. I am starting it off in the Hummer Bird box.

That took care of the hiding part, now for the seeking!  I noticed there was a relatively new letterbox out at Birch Creek State Park (part of the Lake Somerville State Park system), so I went out there Saturday afternoon.  I also had the clue to another box in the same general area and both were on a mile and half loop trail.  I followed the clues to the first one and I looked and looked. None of the noted trees seemed right.  I back tracked to the split in the trail and re-counted my steps. Still nothing.  I looked on the opposite side of the trail and around lots of trees.  I finally gave up on that one and headed to pick up the other box. I found it with no problem.  I went back the way I came and looked around a little more for the first one.  It was getting dark, so I headed back on the trail and back to my car. I REALLY wanted to be the first to find that one box, so I was frustrated.  I stopped by my brother's house and told him and his roommate about my trials.  Then I told them the directions and showed them the clue.  Only THEN did I see the line before the split in the trail which said to go to the left, then go to the split (which would be the 2nd split).  I read that clue so many times, but somehow I kept jumping over that line in the directions.  <insert forehead slap here>  AAARRRRGGGGHHH! 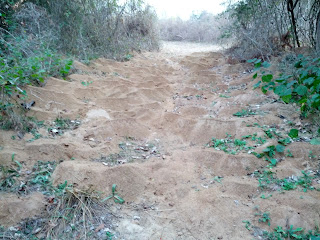 Well, after church on Sunday, I decided to drive the 25 miles again to see if I could find it.  I walked right up to it this time.  I found the container, opened it up and....someone had already stamped it on the day it was published.   There was a little disappointment, but at least I found it.  There was a HUGE leaf-cutter ant colony just back up the trail.  When I saw it on Saturday, I had visions of an Indiana Jones movie. It was a little creepy.  Anyone coming down this trail needs to watch small children and pets. I got home and logged the find.  Later I received a message from the owner who told me the person that stamped the log with with them when the box was placed so that's why she didn't log it.  I was the first to find it then.  Yeah!

It was really nice to hear the waves lapping at the shore while I stamped the boxes over this weekend.  Just a couple of months ago, this entire area was completely void of water. We are still in a drought condition, but it's better than it was. I got my exercise this weekend and got to hear lots of birds.  I didn't see the bald eagles, but I know they have been spotted around the Park in the past week or so.  If it wasn't for so many other activities on the calendar, this would have been a great weekend for camping.
Birch Creek SP carving flea letterboxing opencaching.us trails