Camping at the Coast

We decided to take a mini-vacation weekend at the beach and our cousins (Randa, Wade and Lance) came with us. We left after work on Friday, got loaded up and headed out. After stopping for something to eat and gas, we didn't arrive until 10:30 pm. The State Park was full, so we booked this place up the beach. This was a nice spot and lots of people were still out fishing.  There was one type of fish that jumped up out of the water alot.  We walked on the beach part and saw some little ghost crabs. 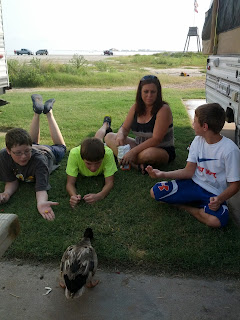 I went to pay for our spot the next morning.  The office was nice and had 3 large aquariums with various salt-water fish in it.  They also had a young raccoon as a pet and the boys enjoyed petting it.  The staff was very friendly.  We stayed for a while in the morning waiting on a spot to open at the State Park.  There were some Mallards that were nestled down in the grass just outside our camper and we all had fun feeding them. There were some wade fishermen out this morning.  I found 2 caches here.  This is also a starting point for one of the Texas Paddling Trails.  If you have a kayak or canoe or like to fish, I recommend trying this place out. 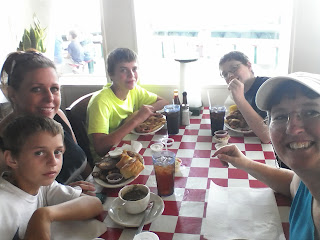 We left San Luis Pass about mid-morning and headed up to Galveston.  The spots were still full, but we picked one out, dropped the camper in the day-use area and went into Galveston to go eat.  We hit a little souvenir shop at the far end of the seawall that had everything for $4.99 or 3/$10.  Cool!  We all got something.  We stopped to eat at Benno's Cajun Seafood.  YUM!!!!!  Everything was great including the bread pudding as a dessert.  I was full, but I just had to try it.  I highly recommend this place!  The boys all got boogie boards at another souvenir shop near the restaurant and we headed back to set up the camper. 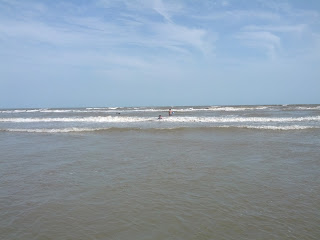 We put on our suits and walked to the beach to play in the surf, build sand castles, look for shells and other beachy-type activities.  There were lots of dead fish on the beach, but it was just one species, so we weren't worried about a red tide or anything. There was hardly any seaweed in the water.

For supper, we went down to a little shop next to Dolphin World.  After buying a few more souvenirs, we got burgers to eat.  $1.99 bottled beer?  Whoo-hoo!  We then drove up the seawall to let the boys watch the volcano erupt at the Rain Forest Cafe and I took them all in to do the River Ride there.  We drove further up to check out all the lights on the Pleasure Pier rides.  It was pretty cool to watch the ferris wheel.  It looked like a kaleidoscope since the patterns and colors changed often.

Sunday morning included another trip to the beach, showers and taking down the camper.  It was a nice relaxing, no set schedule, weekend.