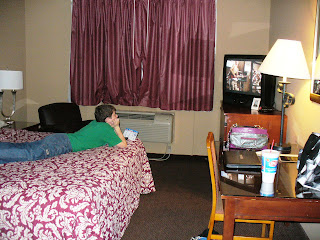 I was in the middle of this work week and looked at the calendar.  I was suprised to see that I had a mostly open weekend and I was lacking about 15 caches from getting 1000 finds.  Friday morning, I made a reservation for a motel in San Antonio.  By 3 pm, I left work, filled up the GeoMobile and headed home to pick up my son and pack (the later only took a few minutes) and we were on the road by 4:30.  We stopped to pick up one cache on the way (and a new county) and grabbed a bite to eat.  After we found the motel and checked in, we didn't feel like venturing out at night by ourselves, so we stayed in.  Colton's idea of a good vacation is a TV with Cartoon Network and a remote.  The King bed was an added bonus.  I set up the laptop and did recon work for Saturday's caching. 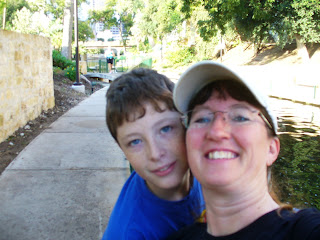 Saturday morning, we got up and hit the Continental Breakfast.  MMM!  Waffles!  We walked down toward the Riverwalk and picked up about 5 more caches and had a nice walk.  There were lots of joggers out at 9 am down there.  Other than that, it was pretty quiet and peaceful. FYI...If you want to ride the river taxis, bring cache (I mean cash). We went back to the room to log the caches and then check out. They let us leave the car there, so we just walked the 3 blocks or so to the Alamo. 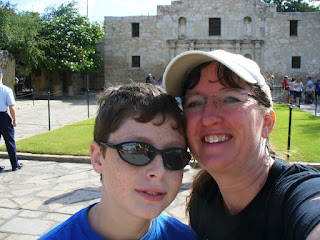 There was lots of activity going on down at Alamo Plaza.  Information booths and demonstrations were going on about early settlers to this Country (State).  We took the customary "standing in front of the Alamo" tourist photos and then turned around to get the Webcam cache.  After several minutes, we had a usable picture saved.  We looked for a traditional cache near there with no luck. Tooooo many muggles for a good search.  We walked up and down the Alamo Plaza looking at the attractions and Colton was just dying to go to the Ripley's Believe It or Not gift shop.

Then, we attempted our first Where I Go cache.  It was a trip around the original property lines of the Alamo.  We did quite a bit of walking, but it was worth it for the history lesson to see some of the property line plaques that we would have never seen (or paid attention to) otherwise.  My Droid worked pretty well for this.  There were a couple places where I had a hard time reaching the target spot since the signal was bouncing around quite a bit between the buildings, but we finally got them all and found the cache. It was even big enough to leave a geocoin that I've been carrying around.  A short run through the Alamo gift shop and we were whipped. 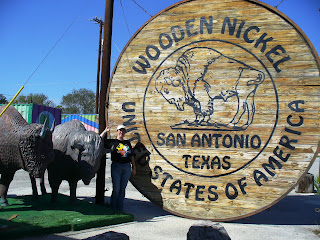 Back to the motel to get the car and get out of there.  I had a couple of caches in mind, so we headed north on Broadway.  Grabbed a traditional and a virtual and then "lunch".  Was it really 3:30 pm????  My watch stopped at 11:30 am.  We were just a couple of blocks from the San Antonio Botanical Gardens, so we picked up 4 more quick caches there.  Then we drove around the corner to the Wooden Nickel Museum and picked up FIND #1000!  It was a virtual listed on Opencaching.US by DudleyGrunt and is called "Don't Take Any...(Wooden Nickels)".  We were also FTF on it - bonus!  The museum itself was closed, but we got our pictures by the World's Largest Wooden Nickel - both sides. 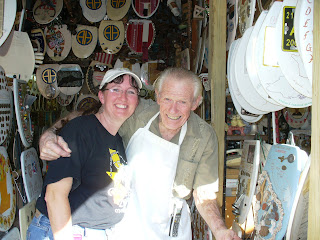 My other target for the day would be 1001 - Barney Smith's Toilet Seat Museum. Colton said, "A WHAT museum?!".  If you are ever in San Antonio, this is a MUST DO Virtual cache and it's not far from the Wooden Nickel Museum.  (Calling ahead is advised - the number is on the cache page.)  We spent quite a bit of time taking in all the artwork and signatures on the 1000 seats created by this 90-year-old man and listening to his stories about many of them. There are 5 seats dedicated to geocachers and we added our names and signature items.  I copied down the tracking numbers from Travel Bugs and Geocoins that are permanently attached for discovery.  After signing the Geocaching Seat #5 and the Aggie seats and leaving Colt's Pathtag, my SigMarx and our wooden nickel, we said our goodbyes and hit the road. Colt even had to admit that this was "Cool".

We made a stop off  Loop 1604 to pick up a couple more Opencaching.US (Opencaching North America) caches, but my battery was dying and we only got to get one.  6:00 pm and it's time to head for Snook.  One more cache near a pit stop on the way and we were done for the day.  It was a long one, but well worth it!  I'm glad my son and I got to spend some quality time together.