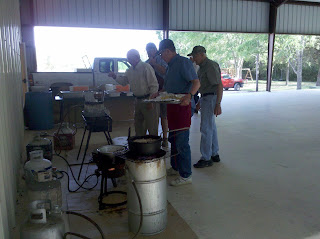 The weekend started with a Fish Fry at our church, Hope Evangelical Free Church.  We had quite a few folks show up and it was a nice treat.  The kids played disc golf (we brought Colton's basket) in the yard, played basketball and played on an X-box.  The adults visited and some played 42 or Chicken Foot.  There was some cackling going on, that's for sure!  Some of the men fried the fish, french fries and hush puppies.  The ladies prepared the drinks and we had LOTS of sides and desserts.  There's no such thing as a "light" meal at our church!

Saturday morning, I got up and headed toward Birch Creek Park on Lake Somerville for the Brazos Valley Geocachers' CITO (Cache In Trash Out) at our Apopt-a-Highway spot.  Erin (flower71) was in charge of this one and she brought kolaches out.  I still had some water bottles left from our first CITO that was donated by Lampo's Water & Coffee. 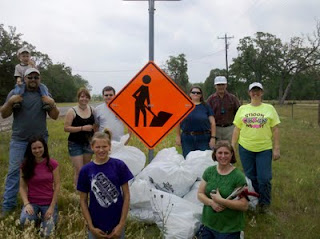 We started at 9:30ish with only 5 people picking up trash. Shortly after we got started, 2 of our friends from Austin showed up.  A little later, we added a family of 4.  It took us 2 1/2 hours and we picked up 15 bags of trash.  We were pleasantly surprised there was not more.  It still amazes me that the IDIOTS who smoke still think it's okay to use the highways as their personal ashtray - especially in this extreme drought that we have been in.  One tiny spark and the roadway and nearby trees, houses, businesses and such would quickly ignite. We gathered all the bags at our start point and took a group photo.

After we were done, we headed to the Buffalo Bar & Grill for lunch.  I love it that they serve breakfast at any time of day.  The pancakes are huge, just ask Erin!  We had door prizes for everyone.  Most of them were donated by GxProxy. A couple were donated by Dale (zzypdale) and myself.  The younger cachers REALLY enjoyed the whistles.  Thanks, Frozen Buns...we think. :) 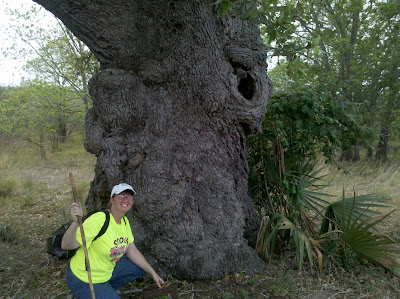 After lunch, some of us headed to Nails Creek State Park to try to find a couple of caches.  We went to the main office to check in.  I love my Parks Pass!  Then we drove down to Newman's Bottom to park and begin quite a long walk to find the first cache, Live Oak on a Sandhill.  I LOVE gnarly trees like this (and ammo cans)!  They have such character.  The jump family headed out and flower71 and I decided to press on to another one near Flag Pond.  Cell reception is HORRIBLE out here.  We tried a couple of trails to get near GZ and then...my battery died.  AARRGGHHH!  We were close, but the brush was VERY thick and we weren't exactly sure where it was, so we sat down at a picnic table for a quick break and then headed back toward the truck. We racked up a LOT of steps today. I should have brought my pedometer for the day. We were surprised to see the nice, clean outhouse on the trail, little trails that led to campsites with log benches, a picnic table out in the middle of nowhere and more.  These trails are really nice and for those of you with horses, this is a great trail system.

Sunday after church, we picked up some To-Go plates from one of the BBQ fundraisers in Snook and took it to my parents' house along with another couple of church members. The afternoon was spent pulling a few weeds in the flower beds, putting a couple more plants in the ground, watering everything and working on the church's website and  Facebook page. It was a nice day just relaxing with my boy and my dog for a while and watching the hummingbirds in the yard.
church CITO geocaching yard