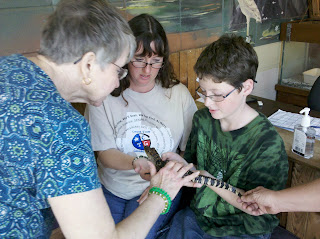 My youngest cousin on my Mom's side is getting married! My son, my Mom and my brother headed out for New Orleans on Thursday morning. Along the way, we stopped in Vidor, TX for lunch and a challenging cache nearby. The Italian Stallion was a rusty nano and it was my Mom who actually spied it first. After we crossed over into Louisiana, we stopped at the visitor center and picked up one there. DeLorme Challenge, Champions, States and Owners was a small container and we left a wooden nickel there. Then we made a stop at the Oil and Gas Park in Jennings, LA to pick up an earthcache, Got Hydrocarbons? and a traditional micro Waters Edge. This one had me teetering on the edge indeed. I came eye-to-eye with a Mallard drake and I'm not sure who scared who first. I kept my balance and kept dry. While we were in the park, we had to take Colton by to see the alligators and we got to hold one of the babies. The lady that was there showing us the gators was very knowledgeable and we learned a lot from her. We continued our journey and stopped at a Starbucks in Gonzales, LA and grabbed the nearby cache Chill Out. Final destination - Jesuit Bend, LA. It was good to see my aunt, uncles and cousins again. With extra stops along the way, it was a long day, but worth it. We picked up a few caches and I checked in several locations on Gowalla. 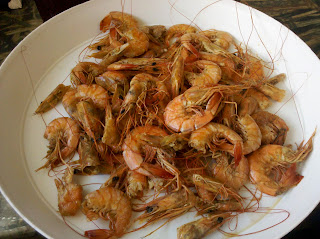 Friday was a day of relaxing and visiting. My brother, son and I took our California cousin down the road from my aunt's home to find her first cache. This was Refresh Me and was a small container well hidden under a log. The path was protected by some poison ivy and I was careful not to touch any of it just in case. I've only had ONE breakout in my entire life and it was not something I want to repeat. We found a travel bug and it's ultimate destination was to go to California, so she's going to take it with her. Perfect!  We went to eat lunch at Salvo's and got some seafood. I had the boiled shrimp, some got po-boys and some got oysters on the half shell. UGH! I just can't handle the texture of raw oysters. There was a cache outside, but there were men working on the roof right above the location, so I'll try to catch it another time. Friday evening was the rehearsal supper at Vincent's Italian Cuisine in Metarie. Open bar, choice of 3 entrees and then bread pudding for dessert. MMMMM! Lots of stories about about Matt & Amy from family and friends and it was a really nice evening. 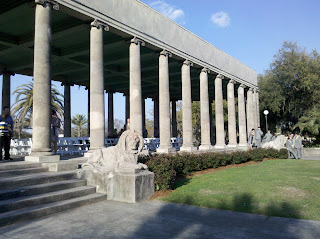 Saturday morning, my aunt and I went to "get beautiful" at a local hair salon. My brother and one of my cousins went to to the French Quarter to check out some of the artists around the Square. We did a few errands and picked up a cache along the way and headed back to the house to relax and visit before heading out for the wedding.  The wedding was at the Esplanade at Central Park in New Orleans.  It was great weather for an outdoor wedding.  There was a cache right there and I took a quick peek, but didn't see it right off.  Any other time, I'd be kneeling down and poking around, but I thought I'd stay clean for the wedding. After the ceremony, many of the pictures were taken right at GZ, so this cache will have to wait for another day. We walked down to the 2-story building where the reception was held. Waiters brought around trays with several types of shrimp, oyster, mini mufalatas and other goodies throughout the night and there was an open bar. There was dancing and there was music for all generations. They had a photo booth there where guests could go in and take pictures. The guests got a little strip of 4 pictures. Matt & Amy will get copies of all the pictures. It was a popular attraction and had a line most of the night.  After the reception, most of the wedding party and some of us cousins went down to Bourbon Street.  It was packed everywhere we went, but it was a fun night that lasted until 2 am. I'm starting to feel that tickle in my throat. NO!!! I can't be getting sick!

We got up around 7 and some got up a little later. We ate breakfast, loaded up and said our good-byes. We were back on the road about 10:20 headed back for Texas. Yep, I've caught someone's cold, so it was going to be a long day. Somewhere along the way home, we saw a Bald Eagle flying around. Cool! We didn't stop as many places on the way home, but we did pick up a quick LPC near the Burger King in Breaux Bridge at lunch. My dog was really glad to see me when we got to Scott's house to drop him off. His roommate watched Dixie while we were gone. Thanks John! We got home, unloaded the van and I crashed on the couch for the rest of the night running fever and sleeping off and on. All-in-all, it was a great weekend, though.
family geocaching louisiana wedding