10th Anniversary of the 1st Ever Event

It started right here in Texas! A few early geocachers got together 10 years ago and decided it would be fun to have a gathering. And so, the Event cache was born. 10 years later, over a hundred of us met in Manor's Ghost Town for food, fun and mingling. There were a few games including the Waypoint Madness game facilitated by Mrs. Captain Picard.  "Meet Your Local Geocacher" was a game by Bigguy In Texas which was fun and everyone took home a few ready-to-place caches.

I started the day with my son, StAggie99, and our friend, flower71. After leaving Snook and heading through Lexington on FM 696, we stopped at our first cache of the day Lexington Landmark at a roadside park.  Problem was...the park is no longer there.  Everything had recently been bulldozed flat to just fresh dirt.  The historical marker was still there, but we didn't find the cache.  That's a terrible way to start the day. Then we continued down FM 696 on the other side of Lexington and came to the alphabet series this side of Elgin which was placed by Joey & Deb. We started at Zara/Zach and worked our way to Inez/Ignacio (which turned out to be another DNF.) 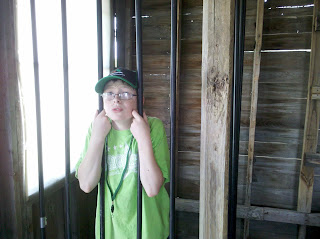 We needed to get on the road to Manor, so we'll save the rest of the series for another day.  We got to Ghost Town and met up wtih Bigguy In Texas and ckpetrus, owner/editor of FTF Geocacher magazine. Frozen Buns of GxProxy was there as well. We had met her at the Texas Challenge a couple of weekends ago.  She graciously gave us several items to use as door prizes for the Brazos Valley Geocacher's next CITO event (Coming Soon).  We got something to eat and it was good food at a cheap price - my favorite! Tip to the outdoor eater: Honey bees LOVE open sodas, especially Root Beer. You had to keep something covering the opening or you'd end up with a mouth full of bees. Colton, of course, had to check out the Jail and the Maze out back.  Some of our Brazos Valley Geocacher regulars were there as well.  agnav, Manofsteel73, Four Across, and scrapnphotos. It's always good to see our Austin-area friends acclanman and grn beret 2b, who have both come to at least one of our BVG events.

We found the cache on the Ghost Town grounds, signed the log and got our goody bags. We also got a geocoin (not trackable) donated by LordBritish, owner of the Necropolis of Britannia Manor III (which needs to be a MUST DO on every cacher's list). Then we headed over to Bigguy In Texas's game. We each got a black bag that had 2-3 ready-to-hide caches in it and we all stood in a big circle. She would call out a phrase and if we matched that, we would go to the center of the circle, introduce our self to someone else there and trade bags. "If you have been to a Texas Challenge". "If you have found an Earthcache". "If you have found over 500 caches"..."1000"... and so on.  At the end of the game, you got to keep the bag you ened up with.  The big winner was a nice bunch of plastic grapes with a little bison tube mixed in.  I'd love to see where that gets placed!

Lots of door prizes were handed out that were donated by a variety of vendors and/or individuals. We traded a few pathtags and stories. Then we walked over to watch parts of the Waypoint Madness game.  We ended up leaving during the game so we could get on the road and pick up a few caches on the way home before dark.  It was a great day!  Thanks to all who worked so hard to put this event together.
10th Anniversary geocaching Manor pathtags